If there is a line between “looking” and “seeing”, that line is exactly the Ara Güler exhibition, one of the top anticipated exhibitions in Rome. Located in the lively streets of Trastevere at the Museo di Roma in Trastevere, the exhibition is a mix of attractive photographs of Istanbul between the 1950s and 1980s, and portraits of celebrities like Salvador Dali, Dustin Hoffman, Pablo Picasso, Sophia Loren, Yaşar Kemal, Aşık Veysel, and Alfred Hitchcok.

Photography goes beyond time and place. It’s not only a reality but also immortal independence of time. As you step foot in the exhibition room, you’ll be captured by a huge portrait of Ara Güler and the words: “the photographer must go out on the street, get to know man on the street and must love and understand him, only then he can give him a place in his photographs. Only then is when something comes out of it. It is not the camera or the paper that’s important. It’s immortality that’s important.”

If you’ve been to Istanbul, this exhibition is going to awaken your feelings of the time you were there. While observing the Anatolian culture between the ’50s and ’80s through Güler’s eyes, you’ll feel like you’ve stepped into a time machine. Pure and simple, the photographs offer us a peek inside the dynamic life of Istanbul, showing us the culture of the city between two continents. “Photography means culture”, and Ara Güler’s exhibition let’s us see the culture of the different areas of Istanbul, from Galata, Karaköy and Beyoğlu, to Kumkapı, Kartal and Ayvansaray.

In Ara Güler’s world, meanings are hidden in details. And as you look at each photograph, you start seeing the controversies, challenges and balances within each capture. Güler is a master of photography, and each of his shots shows the details of the city, the individuals and the crowds. Many of his photographs show movement of people, for example going from the Anatolian side to the European part of the city through boats. There are pictures of men navigating the Bosphorous, pictures of the Golden Horn, the Galata Tower and the beautiful Aya Sofia. 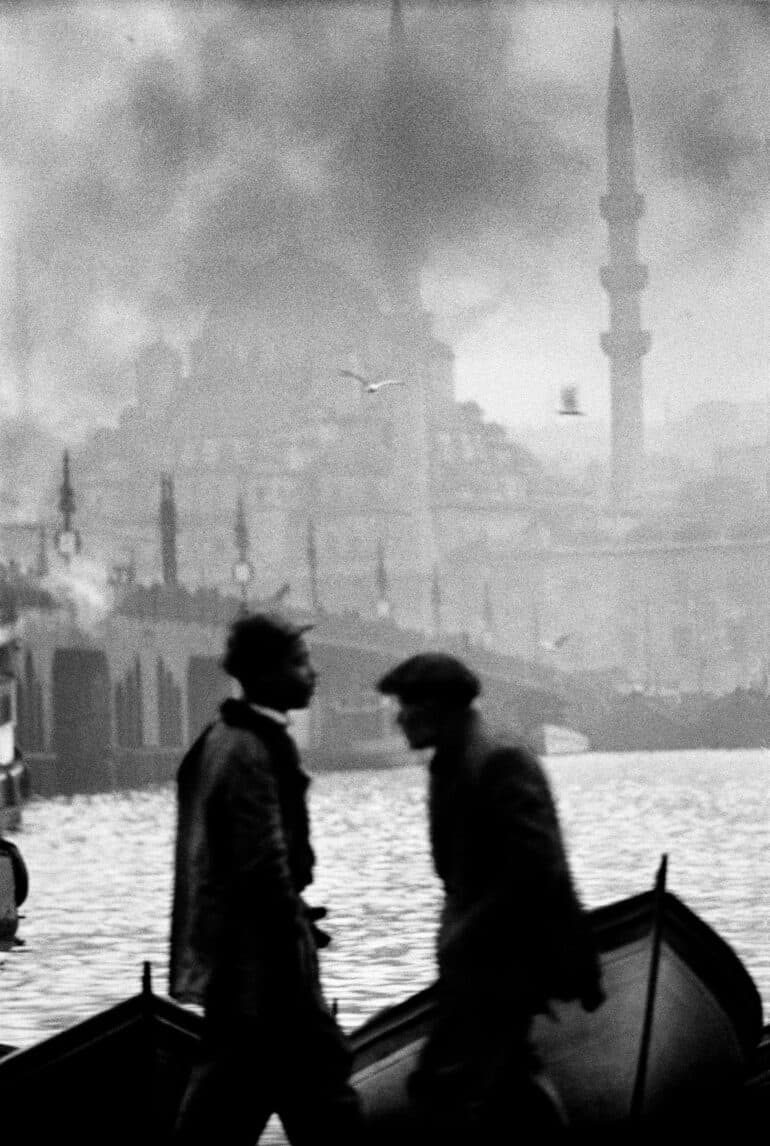 In addition to the stunning captures of Istanbul, a series of celebrity portraits is also on display, each capturing the harmony of its protagonist. In the photograph of Alfred Hitchock, who was known as The Master of Suspense, we can see anxiety and doubt in his portrait. Famous writer Antonio Tabucchi tells us his own short story with that look beyond his glasses in the portrait. The angle of the photograph that resembled musical director Vincente Minnelli suits with his works and character, it is so melodic. Famous actor Dustin Hoffman who seems determined in his portrait, contrasts with a flexible ballet dancer. French film director and screenwriter Jean Renoir has positioned in ruinous, silent and abandoned building, like his silent movies. The unique personality of Salvador Dali is seen in decors and colors. We just stand in “the sense” that both Güler and people meet in his portraits. 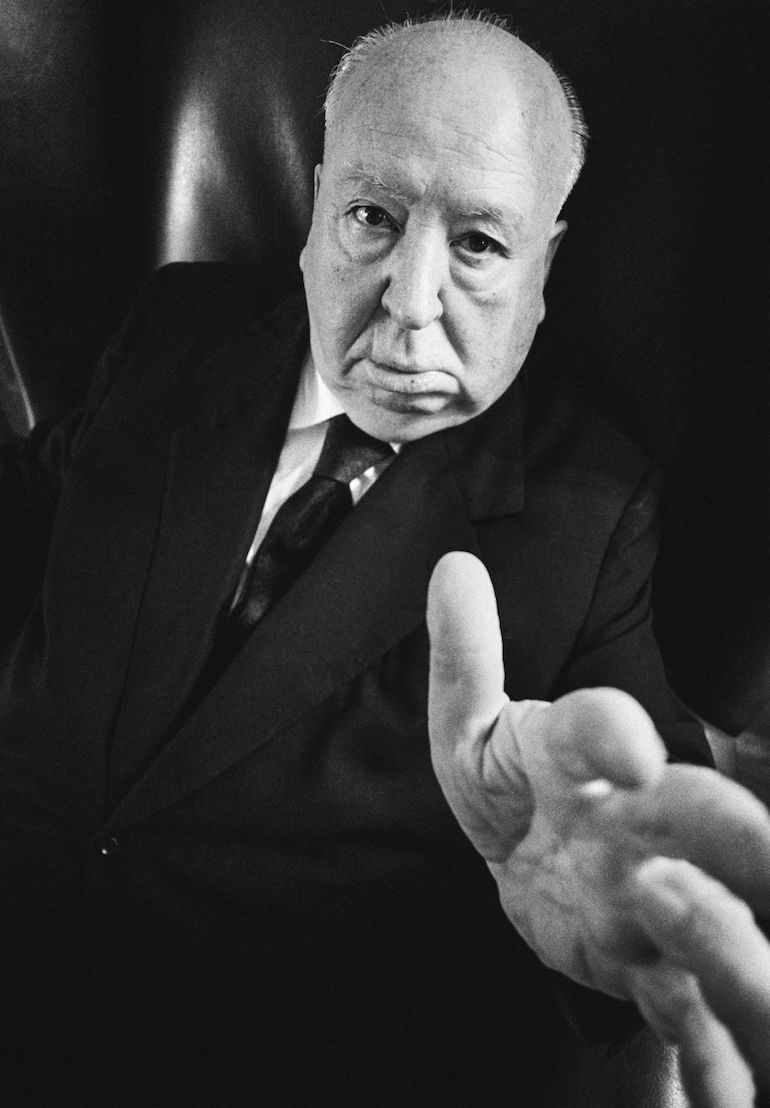 Ara Güler “The Bridge between the World and Anatolia”

As we look through history, we witness that art directs the world. We can consider life with the ideas, thoughts, sensibilities and archaeological discoveries of an artist. Ara Güler is not just a photographer, he directs the world with his art. As noted by his student and close friend world-renowned photographer, documentarist and journalist Coşkun Aral, “Ara Güler is a universal person. He was born and raised in these lands, became the eye of these lands, introduced the world to these lands. But he also introduced the world to these lands. He was a bridge among all human formations in the world of civilization.”(quote from interrview here)

Güler, who gained worldwide fame with his admiration to Istanbul, also made great contributions to the history of humanity with archaeological discoveries in Anatolia. He was the one who photographed the archeological structure that was thought to be the trail of Noah’s Ark on Tendürek Mountain, he found the ancient city of Aphrodisias in Aydın and introduced the Commagene Civilization to the world on Mount Nemrut in Adıyaman. 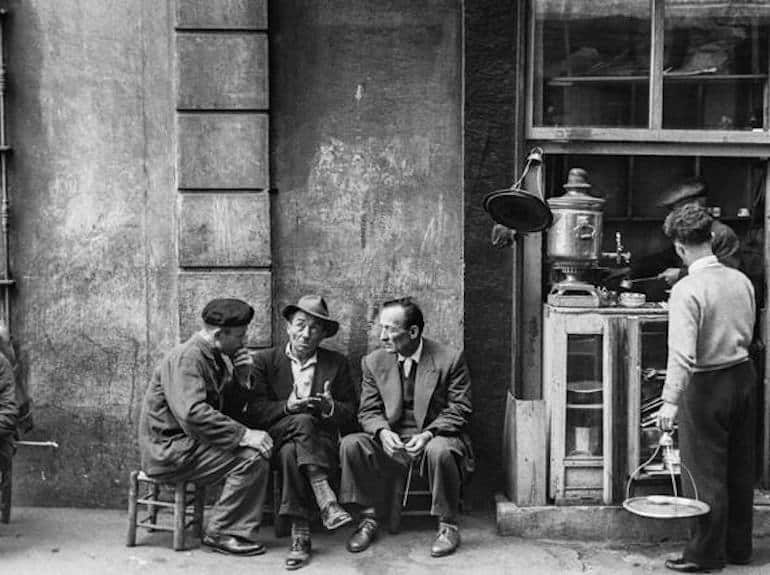 Ara Güler, who was the representative photographer of Turkey in the world, also gained international reputation in the field of photography. In 1962 he was awarded with the prestigious title of Master of Leica, in 2002 that of the Legion d’Honneur (France), in 1999 as Photographer of the Century (Turkey), and in he 2009 he received the Lucie Award of Lifetime Achivement (New York), but there are just some of his important achievements throughout his life.

The Ara Güler exhibition, which the Turkish Republic organized last year, is still traveling around the world’s capitals. It was first displayed in London’s Saatchi Gallery in April 2019, and then in Paris Polka Gallery in May, at Kyoto Tofuku-ji Temple in Japan and at the Alexander Hamilton Custom House in New York during the General Assembly of the United Nations. Rome is the 5th stop, and until May, the exhibition awaits art and photography lovers at the Museo di Roma in Trastevere.

Music suggestion while visiting the exhibition:

get great travel photos with a local photographer