A glimpse into the painter’s world

Down the winding streets veining out from the madness of Campo di Fiori, small artist studios are resisting the touristic sway that holds Rome in its grasp. These warm hubs of creativity are open to the public with ground-level windows flung wide open, allowing a glimpse into the life of native Romans who have worked at their artistic practice and contributed to local community for decades.

Their owners can be found milling around the space and setting up shops outdoors, pulling tables piled with paint-caked palettes, tools, ashtrays and dog bowls out onto the cobbles for light, a chat, and a break from being indoors. Here is a list of several studio galleries held by warm and seasoned Roman artists of the centro. 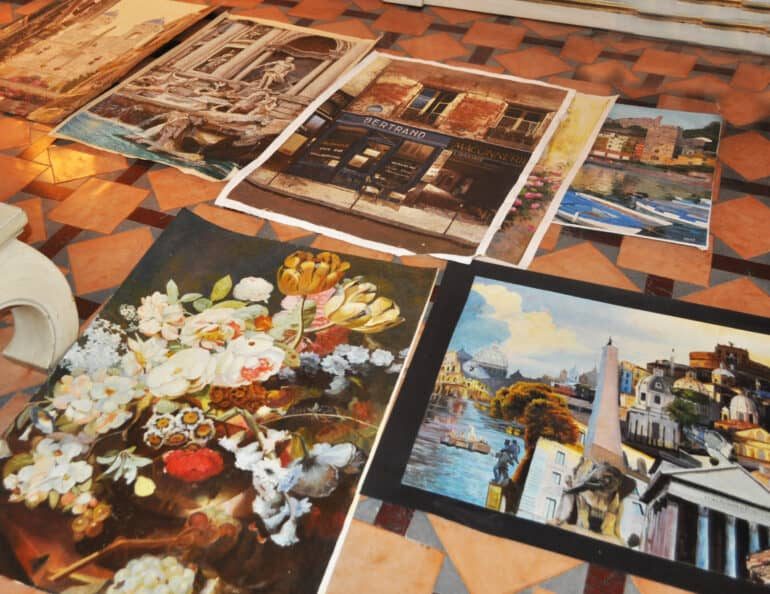 The Roman painter Mauro Rosi Vanni is inviting potential clients to his home and studio to introduce them to his gallery of work. With a dynamic style, his most impressive pieces are oil paintings that capture the essence of life in Rome. The use of colour is what unites his collection of work, bright and energetic they have a presence in a room. The price of oil paintings depends, but ranges between €250-450. But you can also find lithographs of his paintings in almost all of the major bookshops from Rome to Venice, including the Vatican Museum and Uffizi, or purchase them on his website for the very reasonable price of €30. If you are interested in an aperitivo with an artist, you can contact Mauro by phone, Whatsapp or his website. 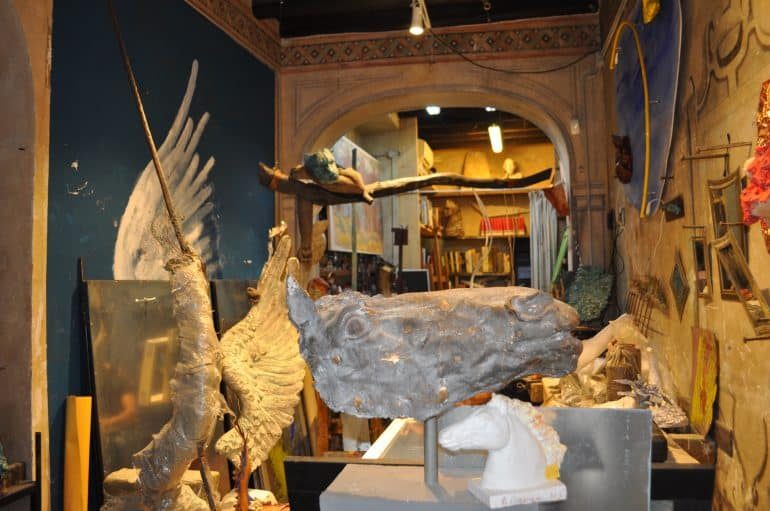 Pietro Simonelli’s studio registers like a surrealist bric-à brac. In the window sit large and smooth carved stone eyeballs, pearly white feet artfully arranged atop vintage writing desks. Perched above are large clay busts of men with ‘zebra-type hair’ erupting from their scalps, turquoise tigers’ heads dangling from suspended branches above. He describes his main point of inspiration as being that of the relationship between man and nature, and uses all mediums available- from sculpted clay and metal to painting – to populate his peculiar and fantastic workshop. 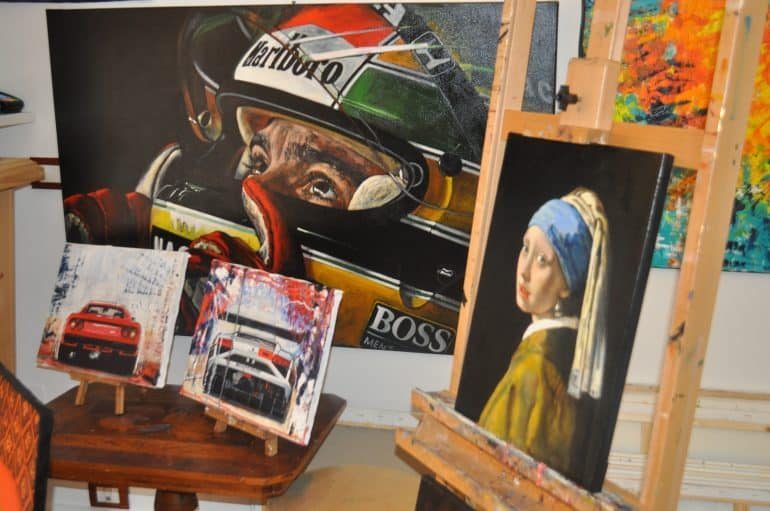 To visit Cristina Sozio’s studio is to find oneself immersed in a wonderful world of mixed artistic styles, reproductions of shadowy 16th century Madonnas as well as bright Klimts and Matisses guarding the walls. However, the ones found here are all perfectly executed reproductions. Sozio’s life’s work is in creating facsimiles of famous pieces that the public knows and loves, many of which are commissioned by either private collectors or museums. As she rightly puts it, ‘a violinist does not learn how to play her instrument without playing compositions of those who came before her. In order to paint, you must study others, there is no other way.’ She passes on this knowledge to her students through her weekly painting classes. 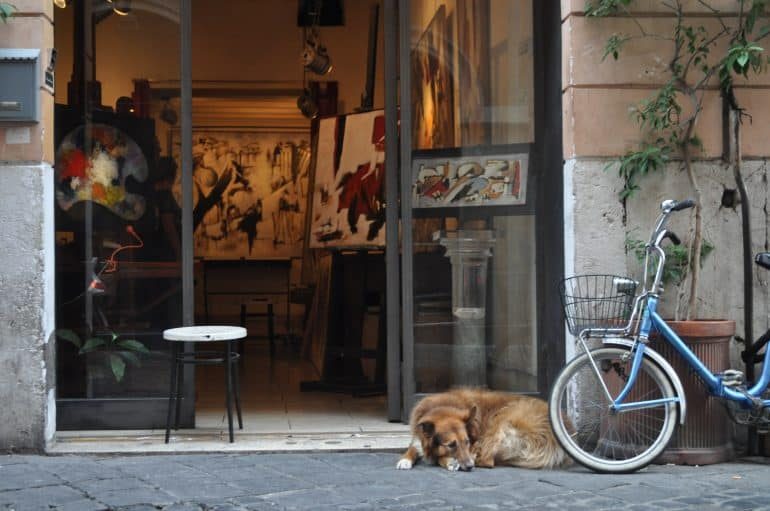 Francesco Corica’s CROMA studio is a space so cozy and narrow, one could easily miss it on the bustling street of Via del Governo Vecchio, were it not for the giant gatekeeper dog who lies sentinel across the studio’s threshold. The painter has occupied it for twenty years and currently has on display large oil paintings representing abstract visions of the city. 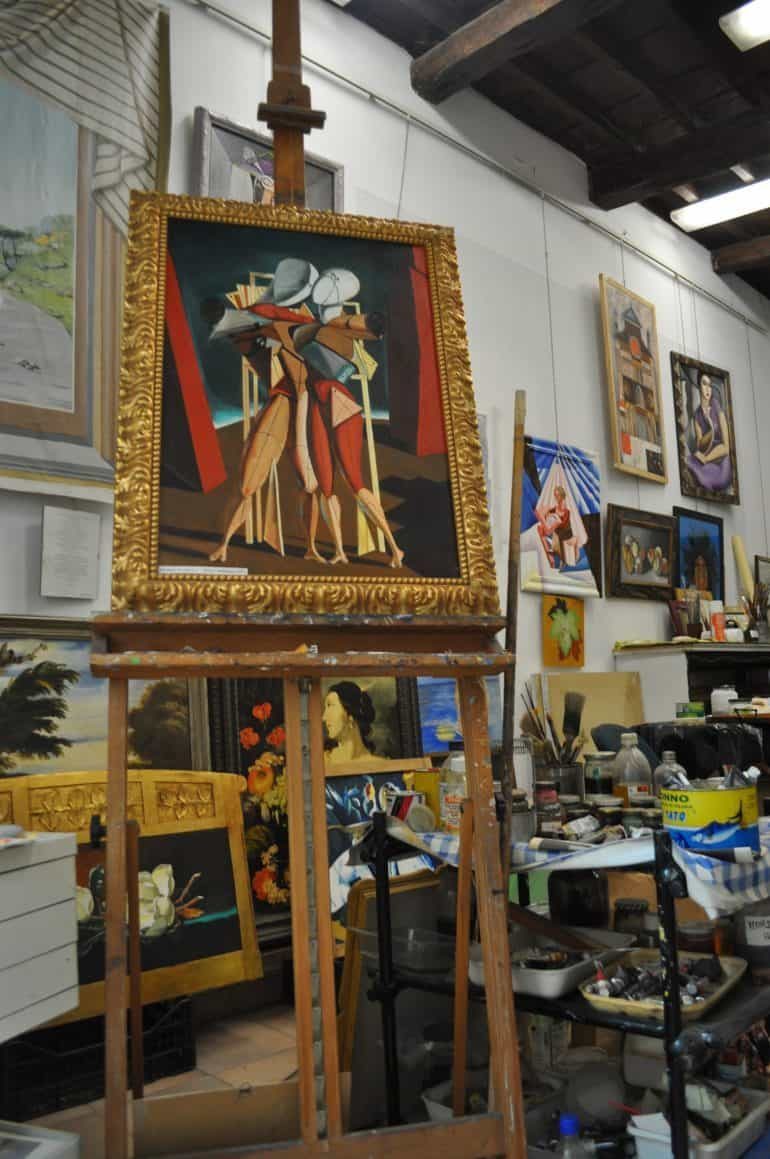 Fiorella Deveze has held her studio on Via dei Banchi Vecchi for several decades and hopes to remain a fixture on the street, which has known much gentrification over the last decade and has seen many studios converted into eateries. An expert of trompe-l’oeil, she also specializes in painting reproductions as well as interior decoration. Her bright studio features masterly De Chiricos as well as lovely feline portraits. 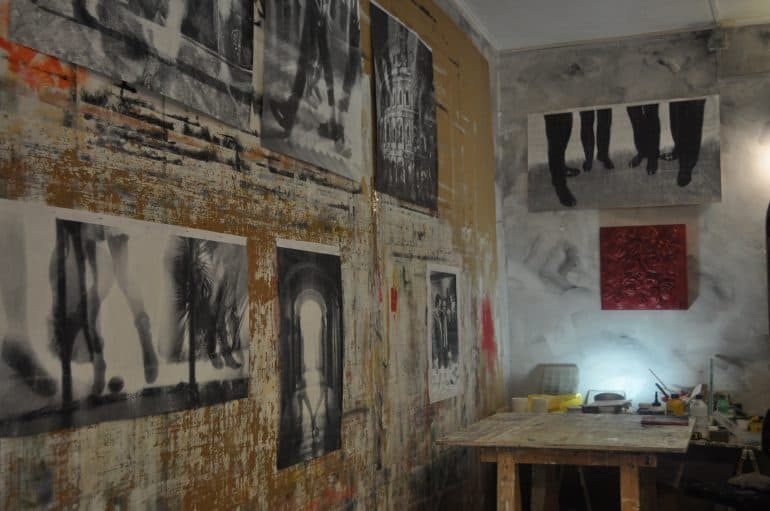 Cristiano de Matteis’ Studio d’Arte sits on Via del Pellegrino, a stone’s throw away from the bustle of Campo di Fiori and home to a myriad independent businesses and restaurants. He and his wife have owned the space since 2000. Originally created for interior design work, the space is now a vehicle for their personal artwork. On display at the moment is a collection of what Cristiano calls photo-paintings, mysterious monochrome depictions of urban life captured in snapshots and blurred and romanticized through a textural veil of applied oil paint.