After three centuries, the Holy Stairs that Jesus climbed are open for just 60 days

At the Santuario della Scala Santa across the street from the Archbasilica of St. John Lateran, the Holy Stairs reopened on Thursday, 11 April.

This is the very marble staircase that Christ climbed to receive his death sentence from Pontius Pilate during his trial on Good Friday. Ancient tradition holds that St. Helen (mother to Roman emperor Constantine) brought the stairs from Jerusalem to Rome in the year 362. Twenty-eight wooden steps made of walnut were placed as covers over the seriously worn and damaged marble in 1723 under the order of Pope Innocence XIII. 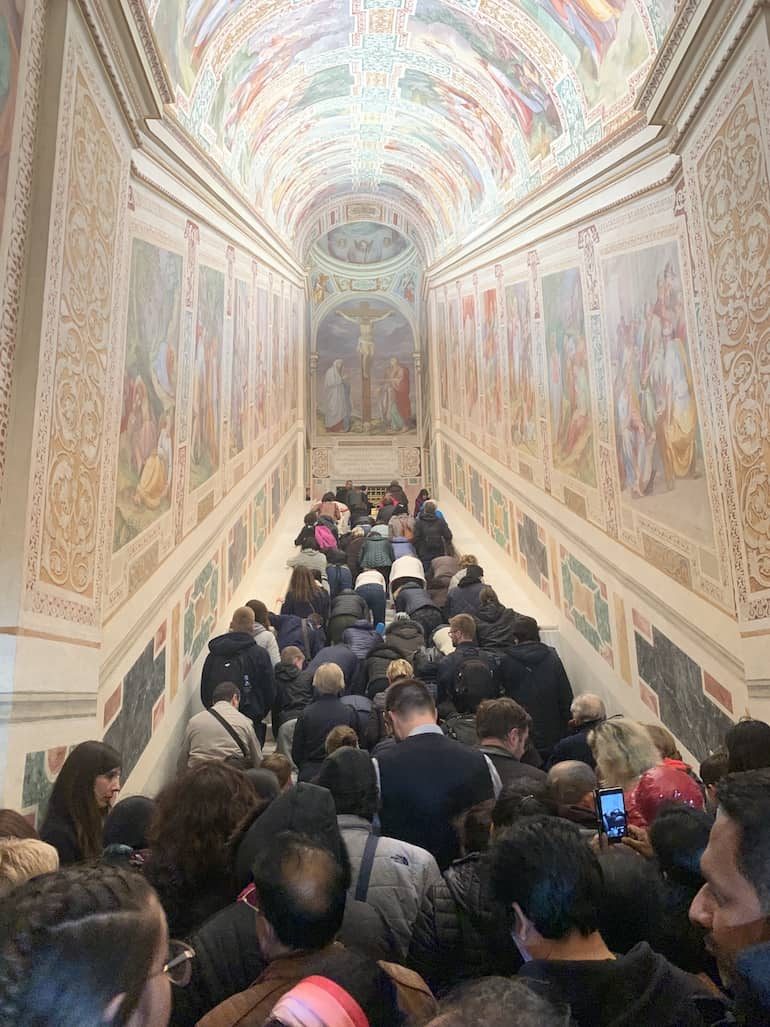 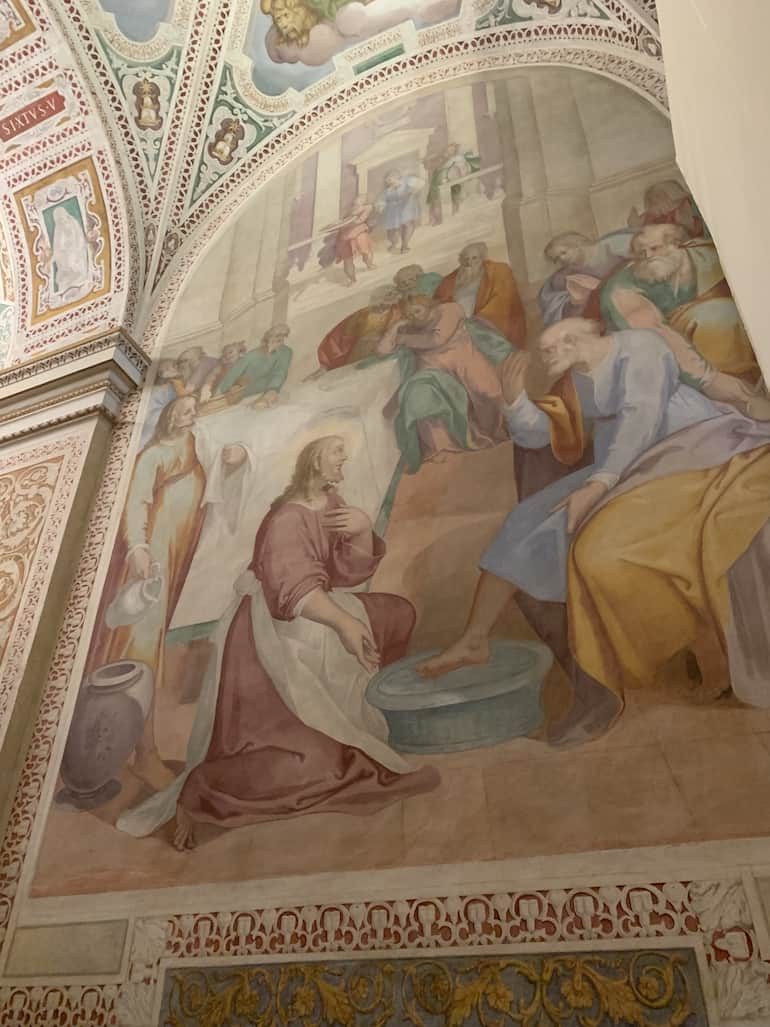 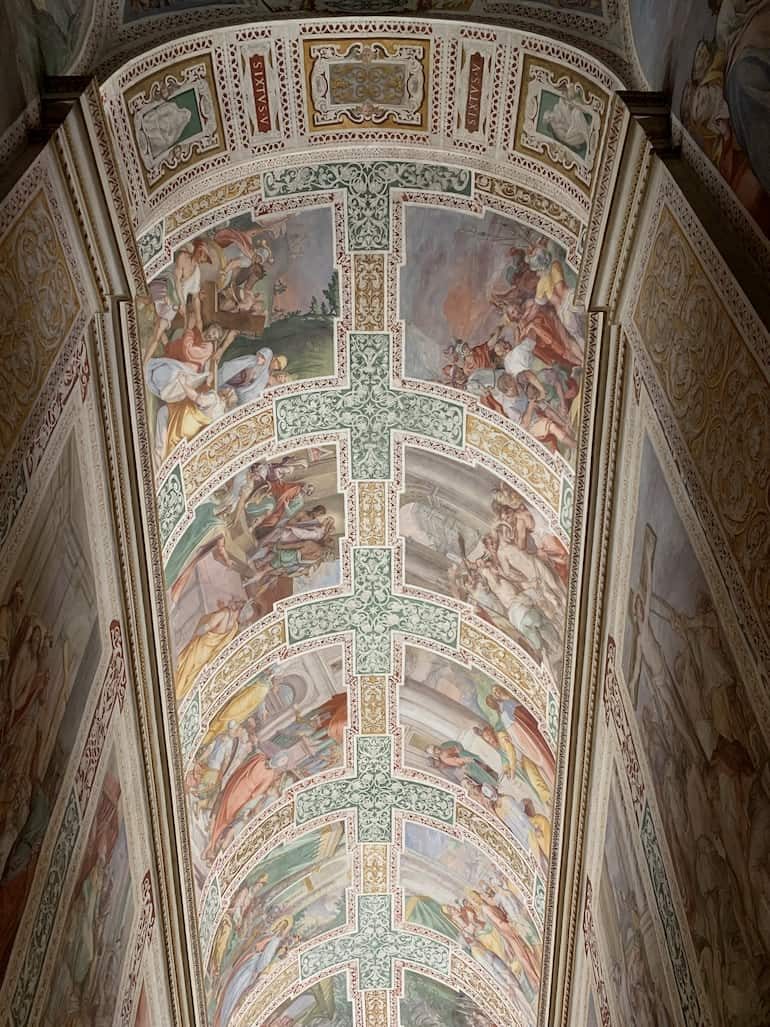 The revealing of the Holy Stairs and surrounding frescoes is part of the greater program of restoration in the Sanctuary. In the mid 1990’s exploratory work was undertaken on the dark, dusty and unsafe surfaces of the frescoes in the Chapel of San Silvestro, the one that was in the worst condition. The Getty Grant Program financed the first phase of the program – about 2500 square meters of frescoes and decorations – which was completed at night between 2000 and 2001. The Patrons of the Arts in the Vatican Museums then took on the burden of the restoration the Chapel of San Lorenzo in 2015, the chapel in which the press conference for the reopening of the Holy Stairs was held. After the two chapels, they turned to the stairs. There are actually three sets of stairs, one parallel set to the left and to the right of the Holy Stairs. Between 2015 and 2019 they worked on the stairs, the outer sets first before reaching the central one. The technical problems were similar to those of the frescoes already seen in the two chapels, damage from rainwater infiltration, requiring retouching and repainting. 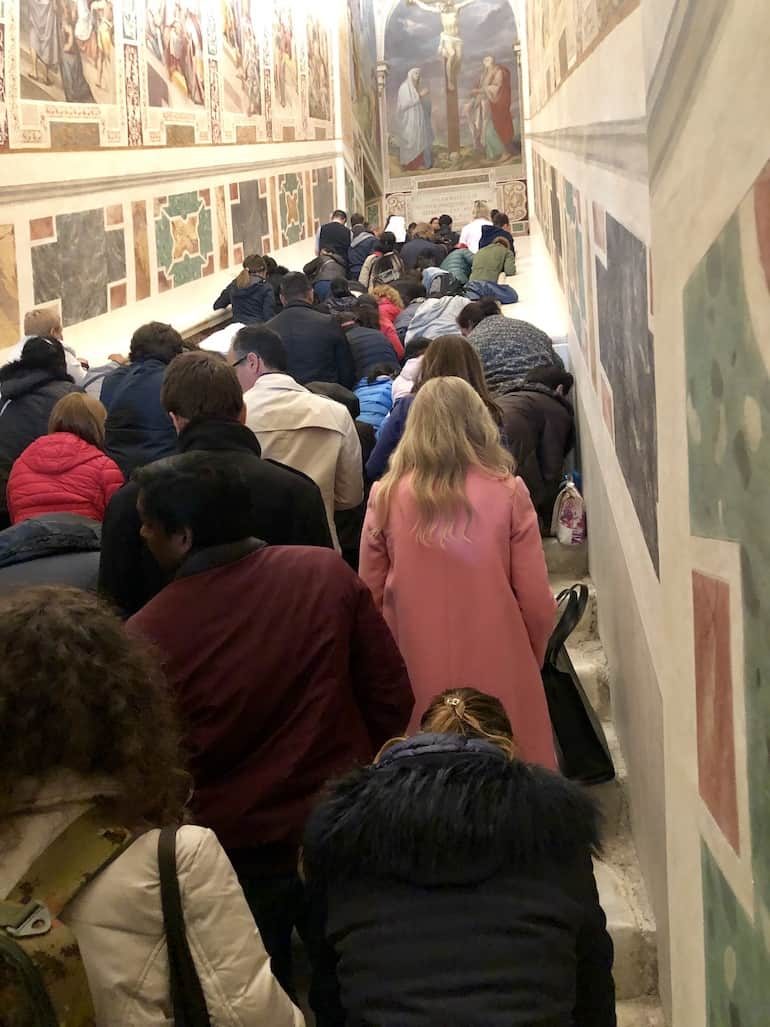 One of the most interesting finds for the restorers was the marble walls that were covered in the restoration of 1851-1853 to conceal the devotional graffiti engravings by visitors since the 1600’s. In returning the color and brightness to the frescoes, there is a sense that the early artists intended to accompany and lift the faithful on their devotional journey. Once the restoration of the paintings on the vault and walls was finished, the problem of treating the actual staircase was ready to be addressed. 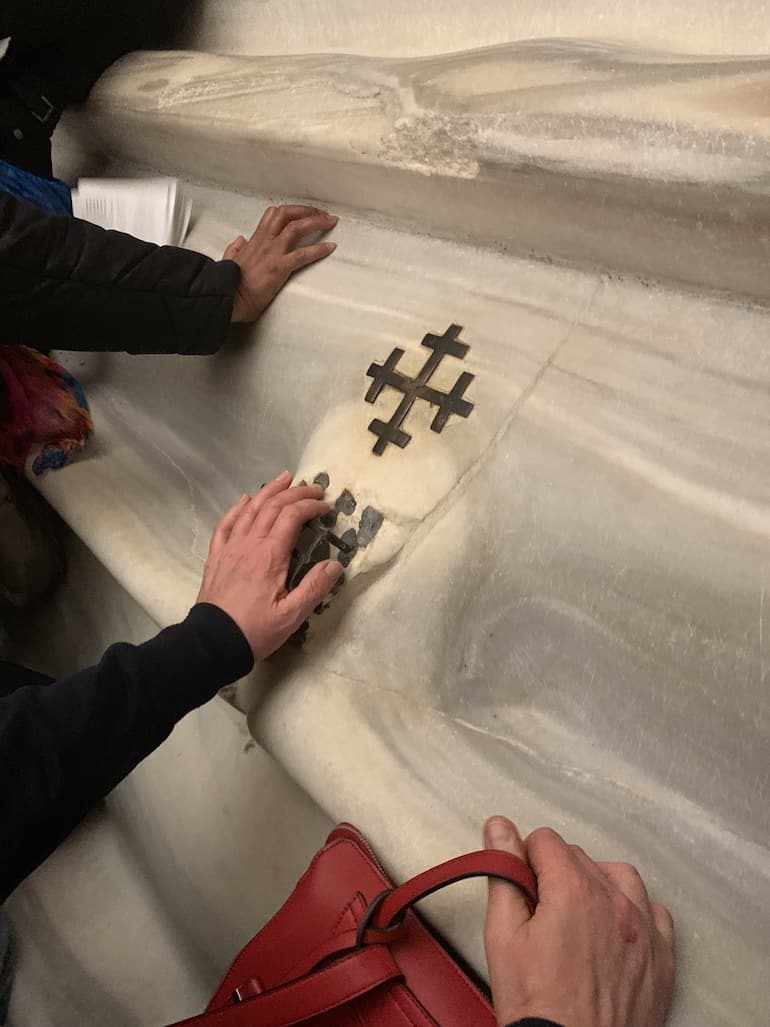 After almost 300 years, the removal of the wooden planks, necessary for the restoration, offered the opportunity to review the 28 marble steps that show the wear and tear of the multitude of faithful who devotedly climbed them on their knees. How much the marble has been consumed is shocking. Thousands of notes, coins, photos and mementos were retrieved amongst the dirt and dust under the wood. The exciting rediscovery also allowed the restorers to find crosses set in some steps, the first in porphyry at the bottom of the staircase and another in bronze in the last step. A third cross on the eleventh step indicates the point where Jesus fell, breaking the marble with his knee and leaving a few drops of blood. A small grate inserted in the marble protects the point of the blood drops. 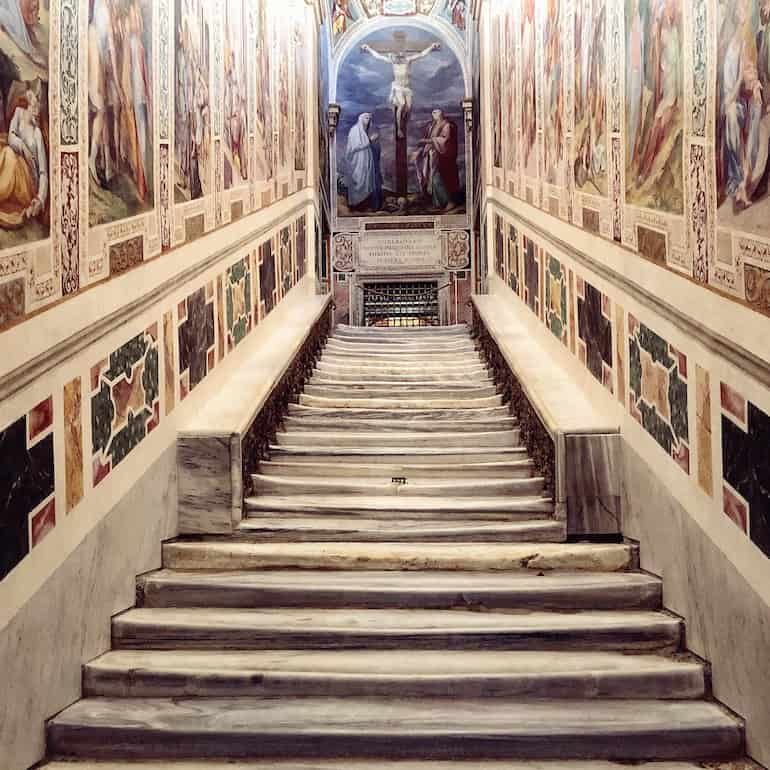 The uncovered Holy Stairs, and thereby access to a key part of the story of humanity’s salvation, are open to the public until Pentecost Sunday (June 9).

Open daily Monday to Saturday: 6am-2pm, 3pm-7pm (Sundays and religious holidays from 7am)