Remembering the Most Beloved Icon of Italian Cinema

Now on display at the Ara Pacis museum, an intimate look at Marcello Mastroianni uncovers the actor’s life and filmography through multiple lenses. Mastroianni’s own reflections and observations from the 1997 documentary “I Remember, Yes I Remember” create irresistibly new angles in which to admire the actor’s personal history and cinematic accomplishments.

At the start of the exhibition, curator Gian Luca Farinelli highlights Mastroianni’s admiration of Clark Gable, Greta Garbo, Errol Flynn, Gary Cooper, and many more film legends. Of Clark Gable Mastroianni comments, “An engaging rascal”; of Fred Astaire’s elegant dancing, “But how to put that beauty into words…”; of Vittorio De Sica, “I viewed him as an uncle, a wonderful uncle, the kind you wait around for on holidays.”

Farinelli creatively introduces Mastroianni through a deflected angle – through his observations of others that nevertheless reveal the depths of his own humility and perceptivity. A sequence from Ana Maria Toto’s documentary, “I Remember,” a journey through Mastroianni’s observations and memories, also appears in the opening room. In it he reflects upon cinema’s influence on his younger self, and questions whether cinema retains a similar effect on younger generations. More sequences from the documentary, which Mastroianni named himself, appear throughout the exhibition and create a resonating motif in which visitors discover new angles into Mastroianni’s life and memory. 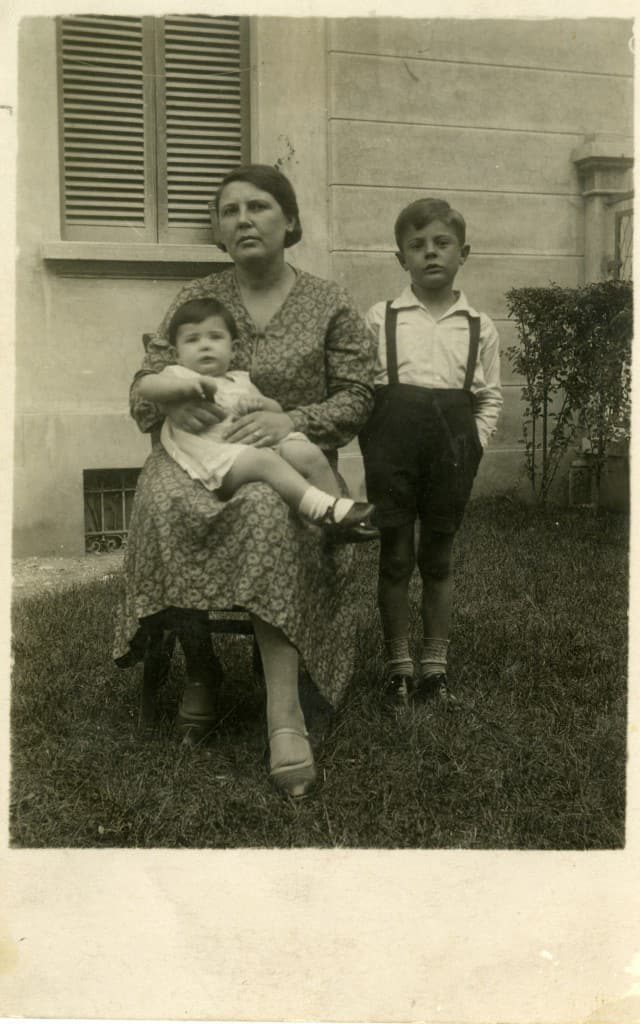 Following Mastroianni’s admiration of his cinematic heroes, visitors receive a more direct look of Mastroianni through his family history and early life. Black and white photos of his parents’ wedding, his birth certificate, and pictures of him and his brother Ruggero revolve around another sequence of “I Remember.” Mastroianni, sitting in front of Ana Maria Toto, proposes, “perhaps memories are all we are” and recalls childhood memories of sweeping sawdust in his grandfather’s workshop, the smell of wood, his youthful shyness towards girls.

Highlights of the exhibition include photographs and playbills from Mastroianni’s early experience with theatre. Even as a child, Mastroianni frequented the stage as an extra, and later pursued theatre at university. Through his involvement with “the Cut,” he was discovered by the manager of Luchino Visconti’s theatre company. As Visconti’s disciple, Mastroianni polished his most provocative characteristics that audiences would later admire on film. From his experience in theatre and in film, Mastroianni observes that “In film you’re cut off more or less here, above the navel—and I think that is a shame because the body has a specific function. It expresses the attitude of a character and even a state of mind.” 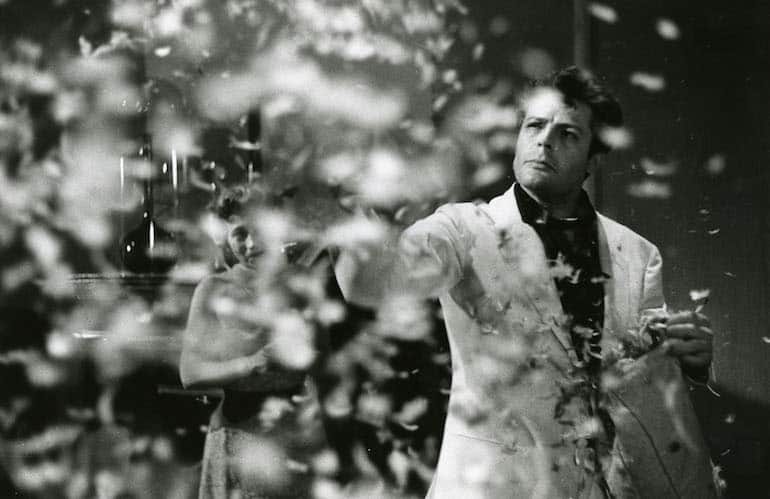 The exhibition would not be complete without exploring Mastroianni’s explosive stardom from La Dolce Vita and ensuing relationship with Federico Fellini. Mastroianni reflects that acting in Fellini’s work in 1959 was “the best period of [his] life as an actor and… as a man.” Mastroianni became an icon and symbol of Italian masculinity, an image that the public did not want him to break free from. Just two years later, in Divorce Italian Style, Mastroianni disturbs his “Latin lover” image and continued to attack stereotypes of virility in proceeding works. Fellini, in attaching this ideal masculine image to Mastroianni also fostered a friendship and collaboration based on “true, total, mutual distrust.” Clips from Fellini’s A Director’s Notebook reveal tense interactions between the director and actor on set; but, nevertheless Mastroianni’s cinematic embodiment of Fellini in his autobiographical work 81/2 demonstrates an intimate intertwining between the two artists. Actress Anouk Aimée once commented, “You couldn’t tell where Fellini ended and Mastroianni began. They were so similar that there was something instinctual between them.” 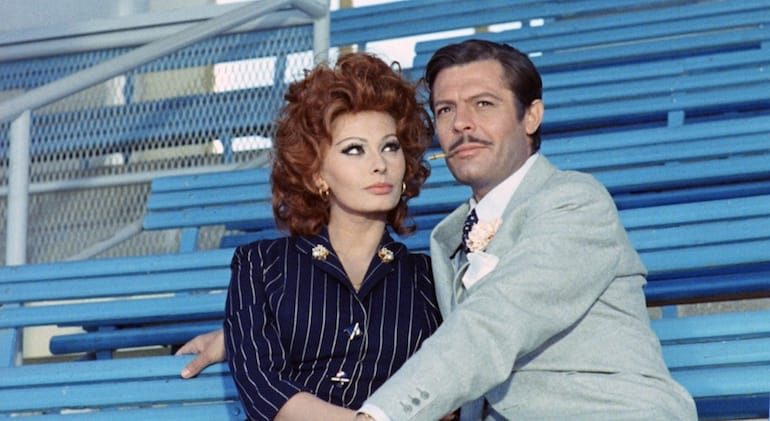 Portrayals of Mastroianni’s evolution as a dynamic actor are displayed with still photos and posters of Hungry for Love (1960), The Organizer (1963), The Stranger (1967), and The Pizza Triangle (1970). Mastroianni ruminates that “maybe because [he] started in theatre where it’s rare to play the same character–[he] could never stand being always relegated to the same role.” Not only is it clear that his early experience in theatre shaped his approach as a film actor, but also that he refused to confine himself to one on-screen identity. 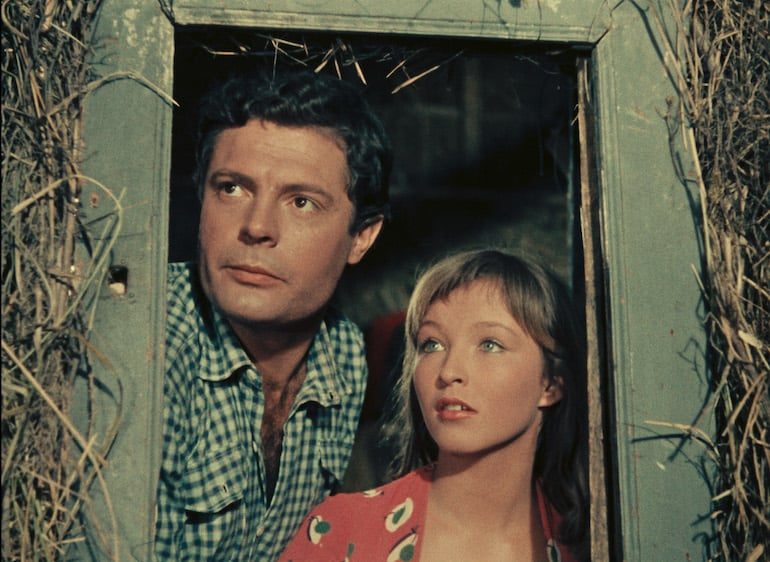 The exhibition concludes with a touching portrait of Mastroianni in the thirteenth section called “The Village.” Awards bestowed upon him at various festivals and events, interviews with his daughters Barbara and Chiara, and clips from “I Remember” leave the visitor with a deep, dynamic perception of the beloved actor. His daughters describe him as a wise man who accepted people as they were and never overdramatized anything. The last image of Mastroianni comes from a clip of “I Remember,” in which he orates the tale “The Next Village” by Franz Kafka. He then reflects that his own life was so condensed, and despite thinking that the journey to the next village will take an eternity, it was actually a very short ride.

Check out Rome on location: the Eternal City as a movie set