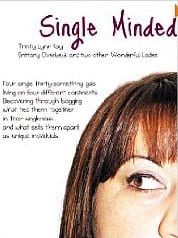 Author Trinity Kay has been living off and on in Rome for two years and during that time has completed her first book, Single Minded. Since her first visit to Rome back in 2000, Trinity has been in love with the city of Rome. Even while back at home in California Trinity read anything she could get her hands on that had to do with living in Italy and specifically Rome, so it is only fitting that in moving here she authored her first novel.

Single Minded is not only Trinity’s authentic look at what it means to be a single 30 something living life in Italy, it also tells the tales of three other single gals each living on a different continent. While Trinity was busy exploring the streets of Rome, Brittany was back at home in California, Jeanette was in Japan, and Kristen was out in the middle of the Sudan. Each of the girls’ stories are unique and engaging, be it the earthquake and tsunami in Japan, the illness of a parent, the struggles of having to move to a remote village or the ins and outs of relationships.

Trinity, tell us a little about yourself…

Where are you from?

Santa Cruz, California but, right now I consider Rome to be as much my home as Santa Cruz, because I believe in that saying, ‘home is where the heart is’ and my heart is here.

What made you choose to live in Rome?

The first time I moved to Rome it was to work as a missionary. I had developed a love for the people of Rome, and wanted to be sure that they had the opportunity to hear about the God I love. I moved back with the same intentions but also because I met the love of my life. Not a Roman, but a Bolivian. (God is funny that way!)

What is your favorite part of Rome?

When I first got to Rome my favorite part of Rome was Trastevere and while I still love wandering the little streets there I would have to say now I most enjoy the parks and the little hidden streets, where I can find some peace.

So do you have some advice for those new to Rome?

Yes. In fact, for those living in any new culture… Approach life not with judgment but with a sense of wonder.

What inspired your book?

I don’t know if I would use the word ‘inspired’ as it was out of frustration that I wrote this book. I was tired of single people all being lumped into one group, I wanted to show the world that each person, single or not, has a unique story and their own way of approaching life whether they live in Rome or some other country.