Cycling around Rome can be tricky, but if you know which routes to take, it can be a fantastic way to discover some of Rome’s lesser-known areas. Here are some of our favourite biking trails that take in some of the more unusual, yet still beautiful, attractions.

The Via Appia Antica has seen two thousand years of history, and served as the Roman Empire’s ‘highway’, as it went all the way from Rome down to the heel of Italy’s boot.

Cycling along a road where the Roman army once marched is quite a unique experience, and although the cobblestones certainly provide a bumpy ride, this route is unlike any other path. You’ll be able to spot remnants of ancient tombs and large ruins, simply out in the open. Even the pesky, uneven cobblestones are the original stones laid down two thousand years ago! If you have an entire day to your disposal, begin at Porta San Sabastiano and ride out to Lake Gandolfo, where you can relax for a bit before turning back to the city.

Bike rentals on the Via Appia Antica:

The Lungotevere path along the Tiber River

Starting from the Tiber Island, at Ponte Garibaldi, you will find a path that extends all along the river through the south to the north of the city. This path, which is approximately six kilometers one way, is perfect for runners and cyclists, as it’s completely off-limits to all motor vehicles.

Bike rentals close to the Lungotevere:

Another area that’s great for cycling and seeing remnants of Ancient Rome, without the crowds, is the Parco degli Aquedotti, or park of the aqueducts.

This sprawling park gets its name from two crumbling, but still majestic, aqueducts in the park, the Acqua Claudia and the Acqua Felice. 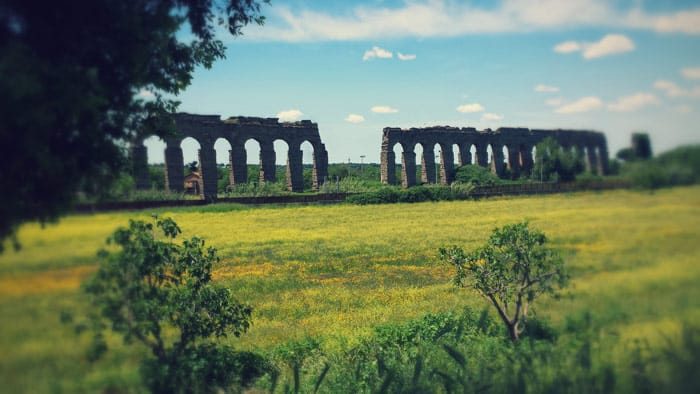 These two aqueducts stand today as a testament to the engineering genius of the ancient Romans. The Romans were able to design their aqueducts so that it dropped precisely 6 inches per Roman mile. Imagine doing that for more than fifty kilometers without any modern equipment or technology at your disposal!

Apart from the aqueducts, the park offers a wonderful respite from the bustling city. You’ll also be able to catch a glimpse of everyday Rome, as locals enjoy using the park for jogging, strolling, cycling, picnics or just a place to relax.

Since it’s a protected area, there’s no development within the park, and you might even spot a shepherd and his flock of sheep grazing in the fields.

To get there, take the Metro line A (the red one) south of the centre to Giulio Agricola, and walk south along Viale Giulio Agricola. At the end pass the 1960s church of St Polycarp, and bear left as you enter the park.

Open Monday to Sunday from 8am to 9pm

On the other side of the city, located on the Gianicolo hill behind Trastevere, is another spacious park that’s lovely for a peaceful bicycle ride. Villa Doria Pamphili, is Rome’s largest public park, and often overlooked by tourists.

The park is divided into three parts: the ‘pars urbana’, including the villa, after which the park is named, with its manicured gardens; the ‘pars fructuaria’, which is the pine forest and the ‘pars rustica’, with the farm. The most scenic and interesting entrance to the park is on Via di San Pancrazio. You’ll cycle on the gravel road that follows the aqueduct Paolo, which was built in 109 A.D, and supplied water to area that’s now Trastevere.