In the busy streets of Rome stands one of the greatest architectural wonders from the Ancient Roman Empire, the Pantheon. The Pantheon is a monumental pagan temple of gods that became a basilica with a tremendously complex history. It is one of the most visited “must-see” locations in Rome, with over 8 million visitors each year.

Built in 27-25 BC, primarily by Marco Vipsanio Agrippa, the Pantheon was later rebuilt and inaugurated under Hadrian between 125 and 128 AC. The building’s concrete and glorious interior has weathered centuries, symbolizing the glory of Rome. The revolutionized architecture, unsurpassed even to this day, transforming lime mortar into robust and durable concrete. Currently, the Pantheon is one of the most imitated buildings in history.

Michelangelo commented it as “the work of angels and not of men,” this grand masterpiece of engineering and architecture is a symbol of a lasting testimony to the great expression of Rome’s glory for more than two thousand years. When imagining the Eternal City, the Pantheon is one of the first and non-separable images that come to mind. 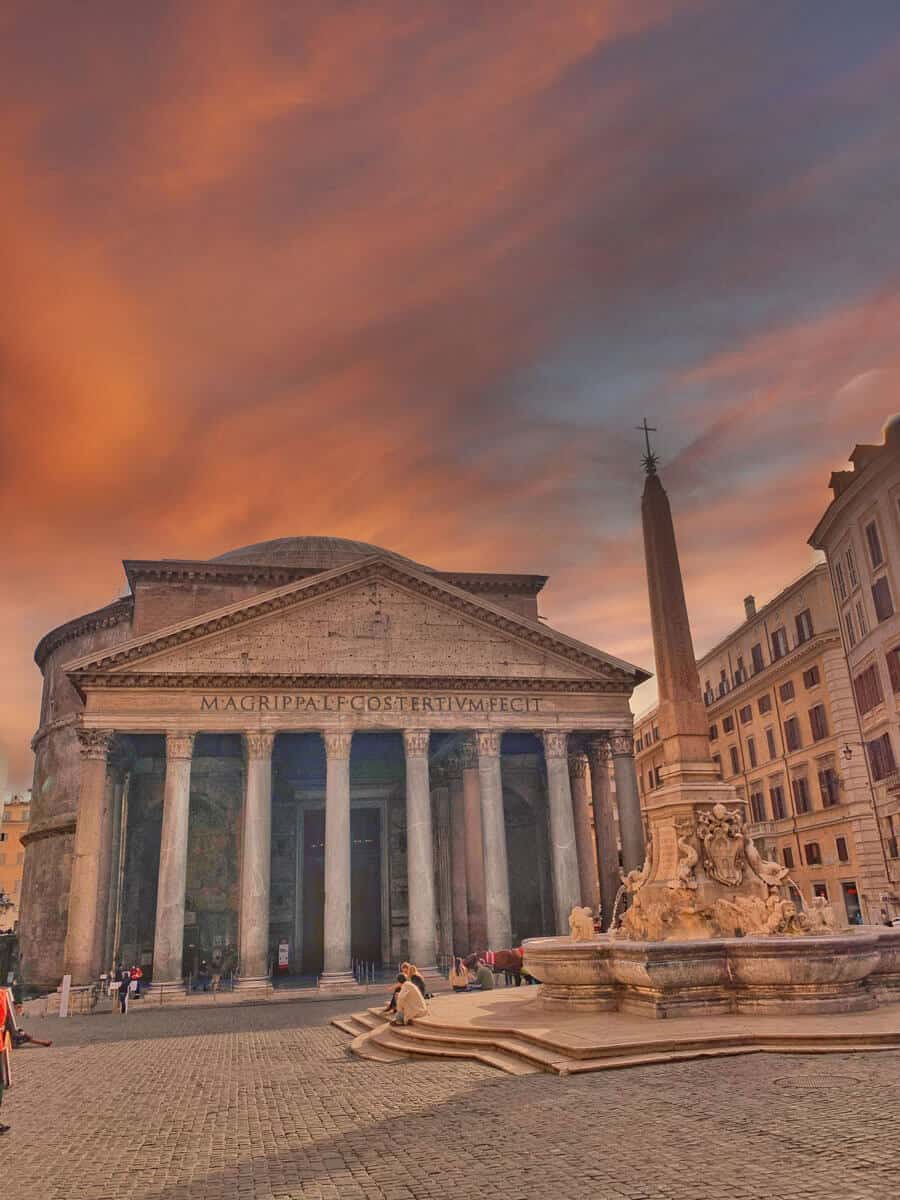 What does the word “Pantheon” mean? What is a Pantheon? 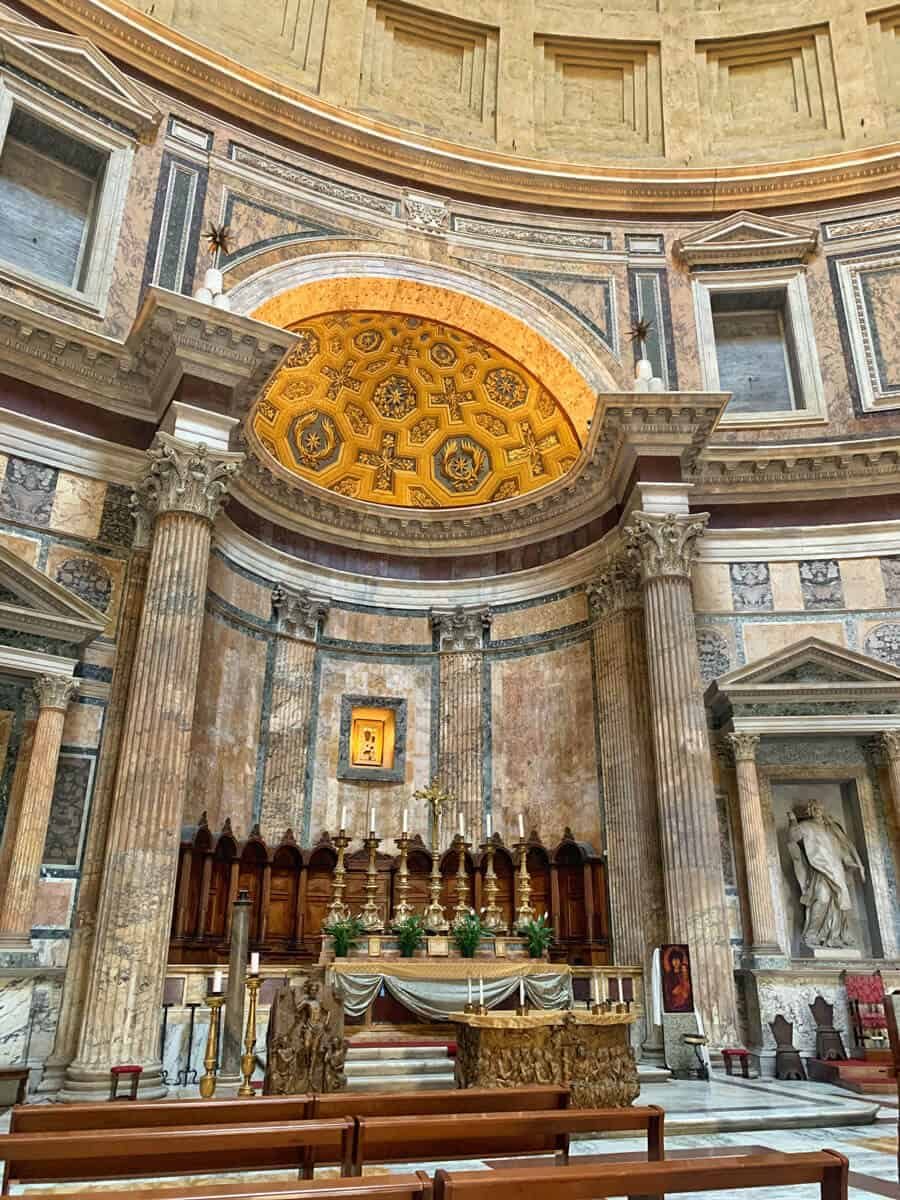 Is the Pantheon a church?

In 609 AD the Pantheon was given to Pope Boniface IV who turned it into a church and is still a church today. The church is called the Basilica of St. Mary and the Martyrs and mass is held every Saturday at 5pm and every Sunday at 10.30am.

Why was the Pantheon built and what was its function?

Marco Vipsanio Agrippa originally built the Pantheon in honor of his and Augustus’ military victory at the Battle of Actium in 31 BC. Pantheon’s genesis is highlighted as one of the defining moments of the establishment of the Roman Empire. The location of the Pantheon is not coincidental: according to legend, Romulus was kidnapped by an eagle and taken to heaven in the exact place where the Pantheon is located. Unfortunately Agrippa’s Pantheon burnt down due to a fire in 80 BC and was later rebuilt by Emperor Domitian, until it was struck by lightning and burnt down again. The Pantheon as we see it today is the third version of the building, reconstructed by Emperor Hadrian. 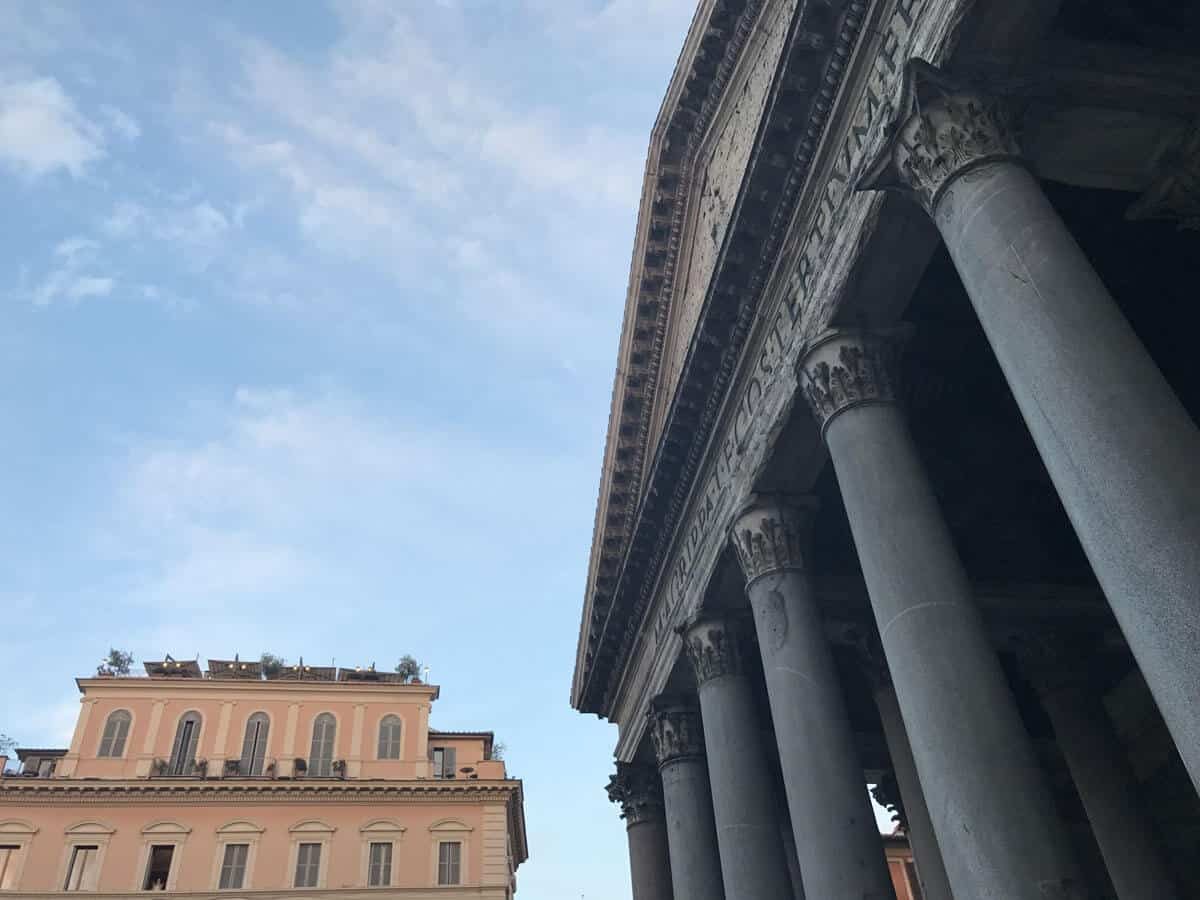 Why did Emperor Hadrian have the Pantheon rebuilt?

Emperor Hadrian rebuilt the Pantheon and inaugurated it between 125 and 128 AD. Hadrian’s vision of the Pantheon was not simply reconstructing the fire damages – but instead creating a more massive and never-seen-before temple. Known as one of the brightest and intelligent characters of antiquity, he accomplished his vision and reached across the globe to draw in these precious materials, which still leaves even the modern world in awe and wonder.

At the entrance, the bronze door, over 6 meters high, beneath 16 monolithic Corinthian Columns imported from Egypt, symbolizing the Roman Empire’s power. The enormous marble bases support these massive columns. Walking beneath the columns that hold such an important temple, you can feel Rome’s accumulated elevation through the debris of history. 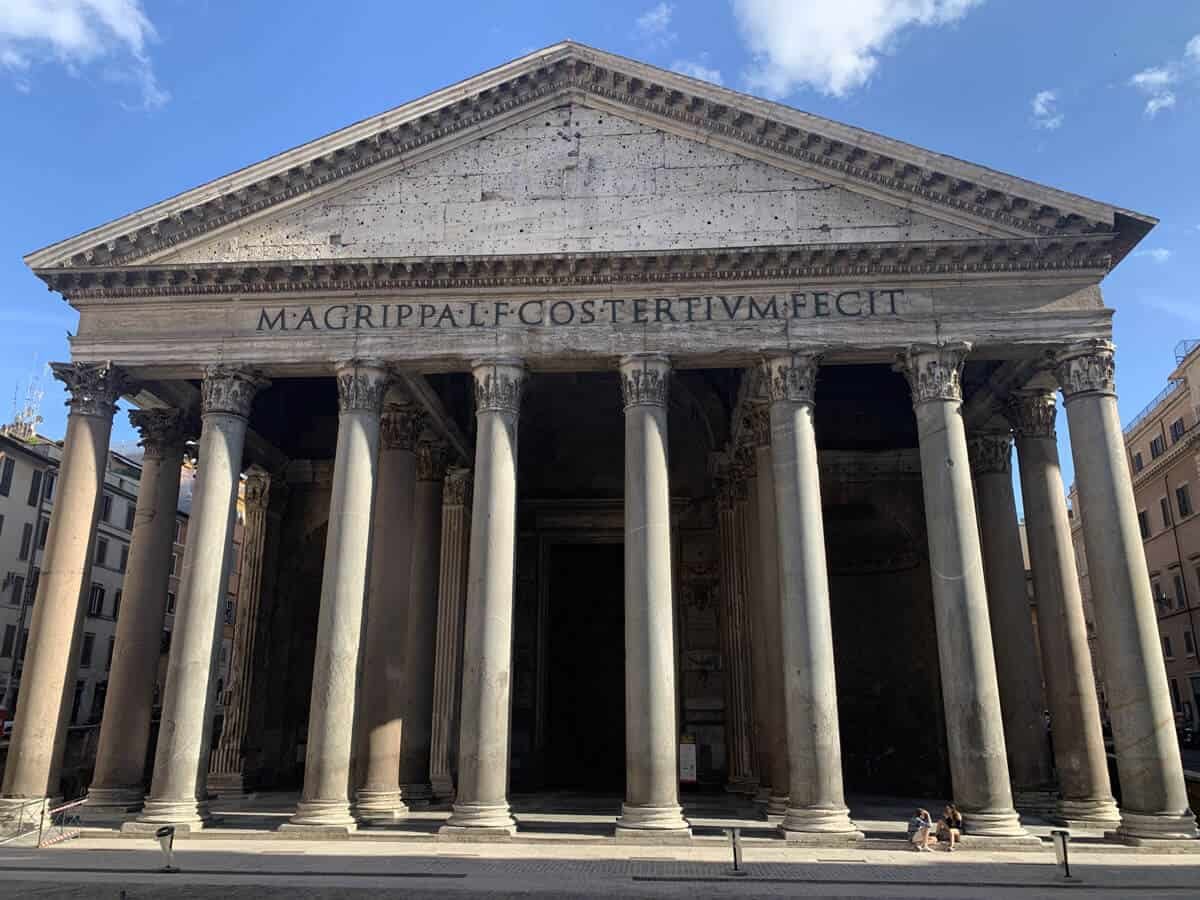 What do the letters on the Pantheon mean?

Even though Hadrian transformed the entire structure, he installed an inscription in bronze letters (hint: modern replacements) of the Pantheon, Agrippa’s first ideator. The inscription was added as a polite gesture towards Agrippa, attributing his as the original founder. The letters on the Pantheon are “M·AGRIPPA·L·F·COS·TERTIVM·FECIT” which translate from Latin to: “Marcus Agrippa, the son of Lucius, three times consul, built this.”

Is the Pantheon the largest unsupported dome in the world?

The Pantheon’s Dome, measuring 44.3m, is the most massive unsupported dome in the world. The largest, unreinforced, spherical concrete Dome ever built. The Dome was laid layer by layer in the same manner as the walls. Still, with few refinements intended to minimize weight – coffers were molded into the underside. Even lighter aggregates were mixed into the concrete – firstly chunks of travertine, then pottery, and finally pumice.

The Dome’s coffers are divided into 28 sections equaling the numbers of the large columns below. “28” is a number of great significance in antiquity – by Pythagoras and his followers – to have mystical and religious meanings connected with the cosmos.

Why is there an oculus in the Pantheon?

As you are walking towards the high bronze door, surrounded by the gigantic columns, you might feel overwhelmed. The stunning circular opening inside the Pantheon, better known as the oculus (eye in Latin), was built as the only source of light inside the Pantheon. But that wasn’t the only purpose of the Oculus, it was also built to allow those inside the temple to contemplate the heavens (and was probably also a solar clock).

What happens when it rains in the Pantheon?

Visiting the Pantheon during a rainy day is a breathtaking experience. As the rainwater penetrates through the Oculus, it creates a ray of light-filled with droplets of rain, flowing away due to an excellent drain system located under the slanted Pantheon’s floors. 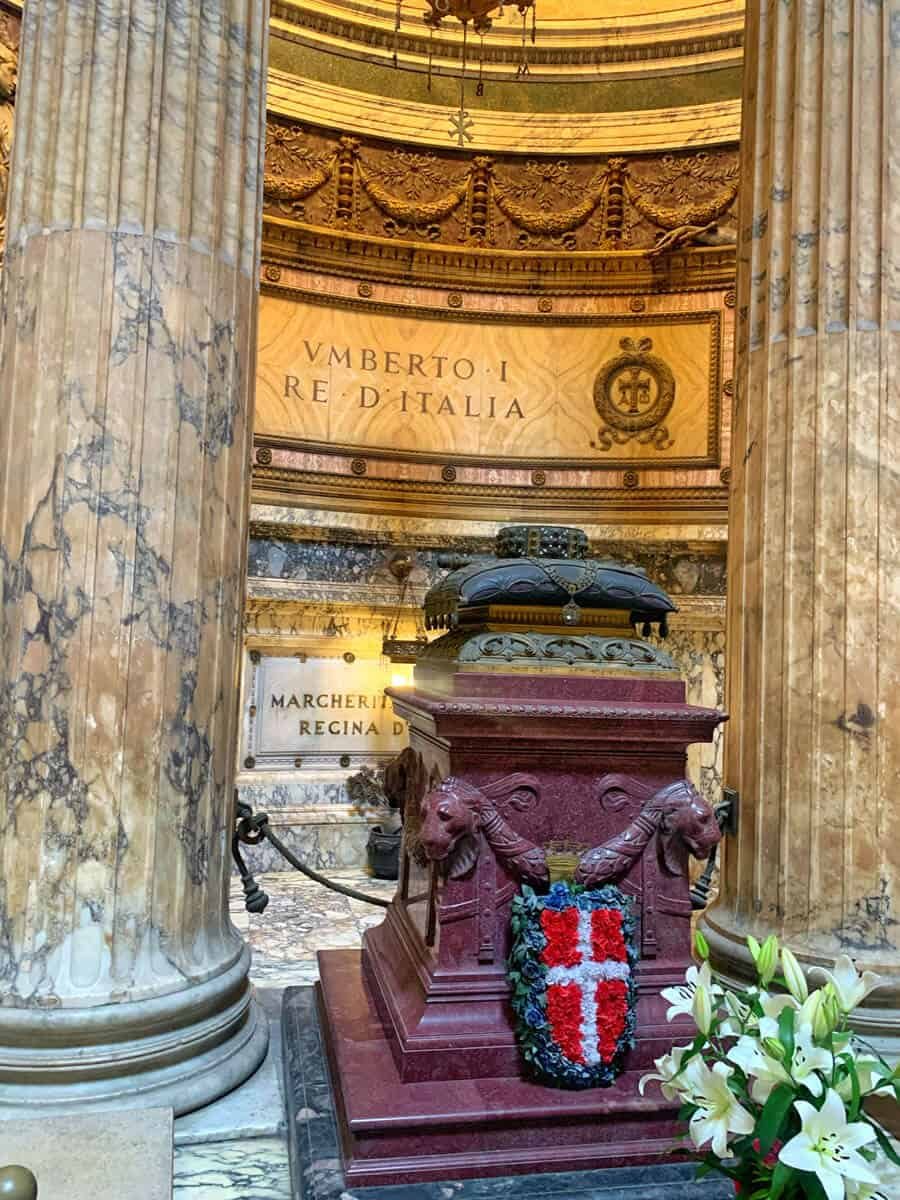 Who is buried in the Pantheon?

The Pantheon’s majestic and timeless charm seems like a layered cake filled with a mysterious and unknown history. From temple to basilica, the Pantheon is also the burial place of some of the most notable characters, including two kings of Italy – Vittorio Emanuele II and King Umberto I – the wife of King Umberto I, Queen Margherita of Savoy, the architect Baldassare Peruzzi and even the famed painter Raphael. 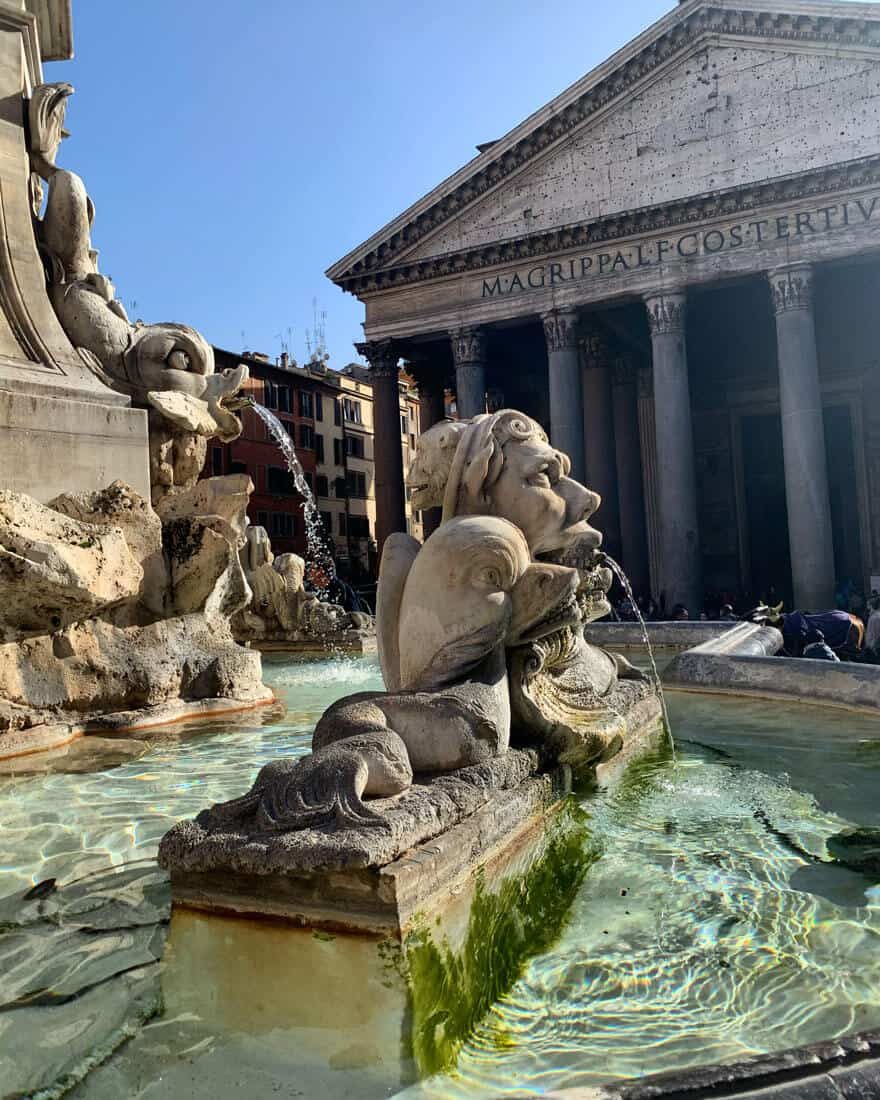 What buildings did the Pantheon inspire?

Similar models inspired by the Pantheon, with a portico in the front and a dome behind, are seen in Christian churches and mosques built in the following centuries. This great architectural structure is also seen in European and American architects in the British Museum’s rotunda in London, the Low Memorial Library of Colombia University in New York, and Pope’s Jefferson Memorial in Washington.

Like many other ancient Roman monuments, the Pantheon was used as a material source for new buildings, weaponry, and boats. Regardless of the fact that various monumental sculptures, bronze elements, and expensive stones were taken – the Pantheon is an unreplaceable mark of Roman antiquity.

What is the dress code at the Pantheon?

Since the Pantheon is a sacred place, visitors should expect a dress code comparable to other religious sites around Rome and the Vatican. While there isn’t a formalized code, visitors should expect to wear clothing that covers their shoulders, midriffs, backs and knees. Enforcement can differ from day-to-day and person-to-person, but it’s better to be safe than sorry. You can read more about the Vatican dress code here.

Pantheon Ticket: is the Pantheon free to enter?

Yes! Rome’s Pantheon is free entry, no ticket is required.

On Sunday and public holidays, the Pantheon is open from 9am till 1pm.