Day trip from Rome to Florence: how to spend 24 hours in Florence

Take the fast train from Rome and you can arrive in Florence in just over an hour, ideal for a weekend getaway or even an energetic day trip from Rome. As the birthplace of the Renaissance, Florence is packed with art, architecture and historic monuments to admire but is compact enough to retain its easygoing charm, and most sights can be reached on foot. You won’t discover all of Florence’s treasures in just one visit so a return trip is a must, but here’s a few ideas on how to spend one day in Florence.

Book your Day Trip to Florence from Rome Private Tour

How to plan the perfect day trip to Florence from Rome 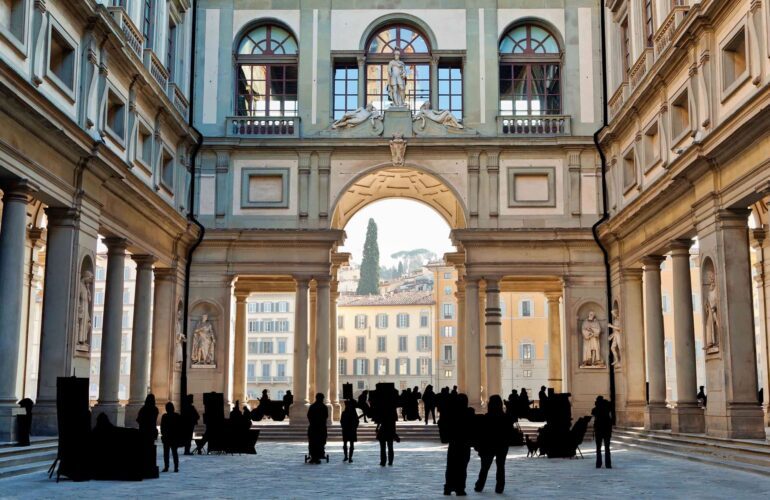 Can you really see Florence in one day? Most definitely not. We always suggest travellers to spend at least three days in Florence but we also know that many of you are short on time. Plus, one day is more than enough to fall in love with the capital of the Renaissance. And 24 hours in Florence is better than zero hours in Florence. Just remember that as in everything, when you’re short on time planning is essential. So we’re here with some great insights on how to plan your day trip from Rome to Florence.

Our first rule is to plan ahead. You already have limited time in Firenze, you don’t want to be spending it planning your itinerary or waiting in line to purchase tickets to museums. So check out train schedules from Rome to Florence, purchase your fast train tickets and plan your day. We suggest you arrive to Firenze early morning so you have the whole day to enjoy it and depart in the evening. Below we’ve listed a few of the top Florence attractions, pick a few that you really want to see, purchase your skip-the-line tickets and get ready to enjoy this Tuscan gem!

How to buy fast train tickets to Florence 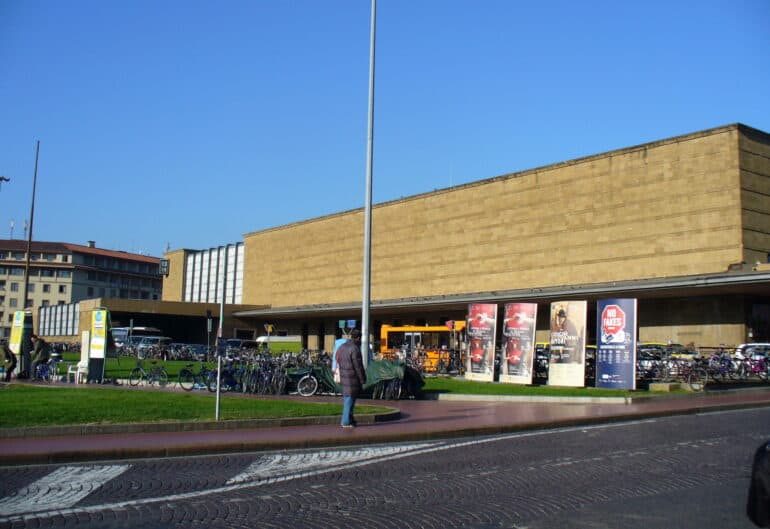 The first thing that people ask when planning a trip to Florence is “how far is Rome from Florence, anyway?” Lucky for us, it’s just 260km away, meaning that if you take the high speed train from Rome to Florence, in just 1 hour and 30 minutes you’ll have arrived to destination. You could also drive to Florence but we suggest taking the train for two reasons: it’s faster and Italy’s railway network is great, with trains running often and on time.

So where should you purchase your tickets and which train station should you use? Since Italy has central train stations, make sure to get the train from Roma Termini Station (Rome’s central train station) to the Firenze Santa Maria Novella Station. Fast trains depart every 20 to 30 minutes every day from approximately 6am to 9pm, so you have plenty of options! As you can find discounted tickets if you plan ahead, we recommend purchasing your tickets in advance.

There are two companies that operate high speed trains in Italy: Trenitalia and Italo. While Italo is known for offering lower rates on train tickets, it actually depends on how far in advance you purchase your tickets. In any case, both websites are easy to use. Italo only offers high-speed train solutions. While if you book through Trenitalia, the high speed trains are called the “Frecce” and you should take the Frecciarossa or the Frecciargento for a roundtrip from Rome to Florence. Don’t take the Regional or Intercity trains as they can take much longer due to the many stops and slower speed.

To book your train tickets from Rome to Florence, you can book them directly online on Trenitalia or Italo or here or you can purchase them directly on the day of travel at the train station at the kiosks. We urge you to book in advance as you may find discounted tickets and more seat availability.

What to do on a day trip to Florence from Rome

One of the plus sides of spending a day in Florence is that everything is almost walking distance. So we’ve taken the liberty of giving you a list of the top attractions in Florence, so that you can pick the ones you’d like to visit! Don’t forget to stop by for a lunch break at Mercato Centrale, the San Lorenzo Market, the Antico Vinaio or La Prosciutteria! 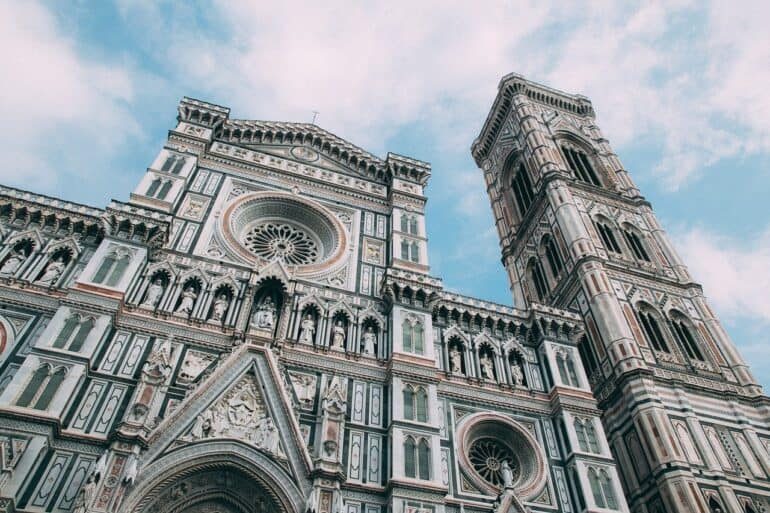 Santa Maria del Fiore is an imposing Gothic-style church built on the site where the ancient cathedral of Florence once stood, the Church of Santa Reparata, whose remains are visible in the crypt. It is one of the most famous cathedrals in the world. But what really gets people is the astonishing dome of the cathedral, which from 1431 till 1888 was the largest dome in the world! People are still asking how architect Filippo Brunelleschi managed to built it. If you want to get one of the most beautiful views in Florence, climb up the dome but make sure to get your priority entrance ticket instead of waiting for over 2 hours in line! 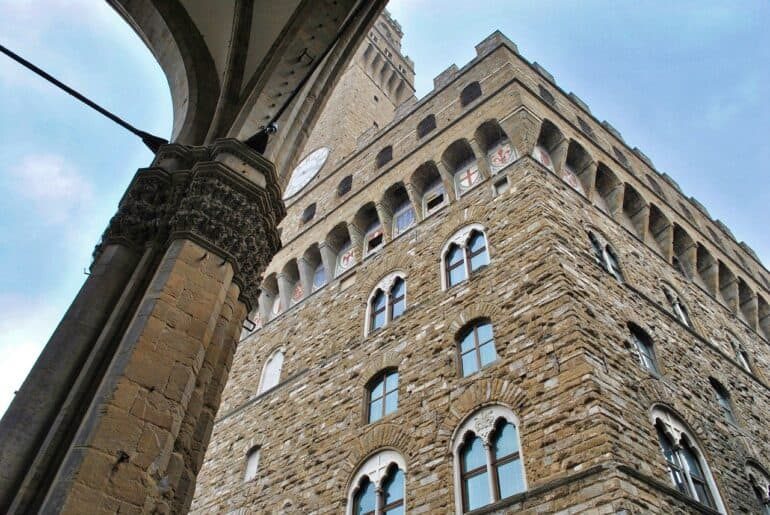 The beauty of Florence is that in a few steps you move between one monument and another. Footsteps from Piazza del Duomo we find ourselves in Piazza della Signoria, the center of Florence’s political power since the 14th century. Rich in history, this is where you’ll find the famous Palazzo Vecchio and the Loggia dei Lanzi. Michelangelo’s David (now in the Accademia Gallery) was placed in front of the Palazzo Vecchio to commemorate the power of the Republic of Florence which contrasted that of the Medici family. Opposite was the Hercules and Cacus statue by Bandinelli, which celebrated the physical power of the family. Next to Palazzo Vecchio is the Neptune fountain which recalls the ambitions of the Medici family in the maritime sector. 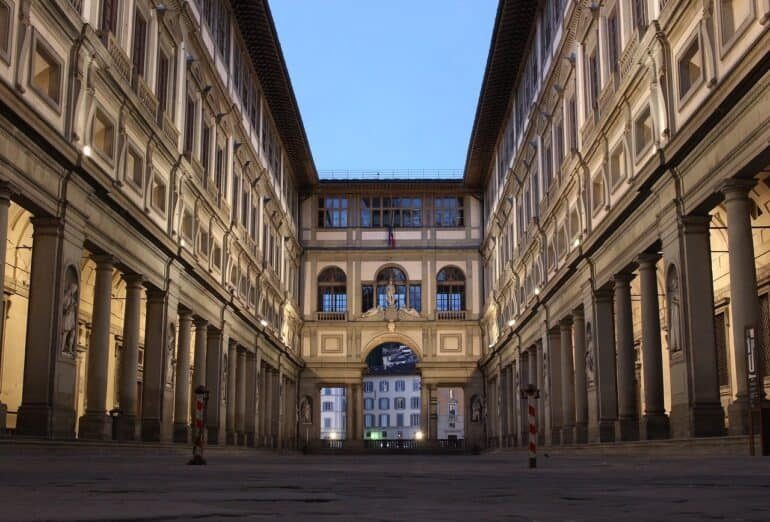 No trip to Florence would be complete without a visit to the Galleria degli Uffizi. A stone’s throw away from Ponte Vecchio, the Uffizi houses the most important works of the city, and among the most renowned worldwide. Here, ancient paintings alternate with sculptures from the Greek and Roman period, with drawings and engravings. But the largest part of the Uffizi Gallery is the one dedicated to the Renaissance, the period in which the city of Florence flourished. Get ready to see works like Botticelli’s Birth of Venus, the Madonna del Cardellino by Raffello, Adoration of the Magi or the Annunciation by Leonardo da Vinci, among others. We recommend you either visit the Uffizi or the Accademia on your day trip to Florence! 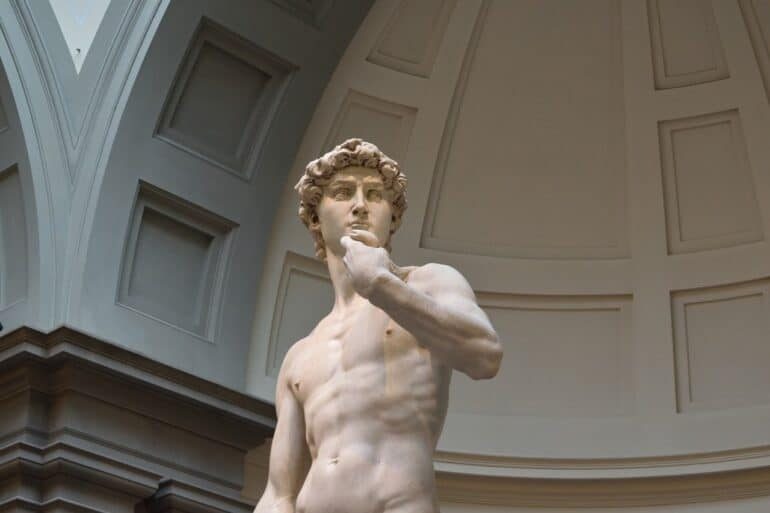 The Galleria dell’Accademia is home to Michelangelo’s David, the consummate example of marble sculpture and an iconic symbol of beauty, strength and of Florence itself. In fact, The Accademia Gallery houses so many sculptures by Michelangelo that it’s also known as the “Museum of Michelangelo”. In addition to the statue of David, the famous sculptures by Michelangelo called Prigioni, originally located in the Boboli Gardens, the San Matteo and the Pietà of Palestrina are kept in the Museum of the Academy. We recommend you book your guided tour in advance, it is after all the most visited museum in Florence! 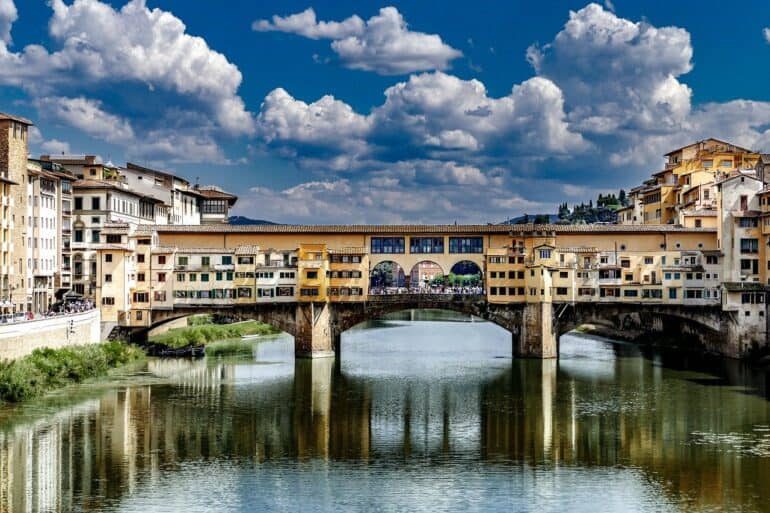 Another famous symbol of Florence is undoubtedly the Ponte Vecchio, which allows you to cross the Arno river that flows through the historic city center. As its name implies, this bridge was built in remote times, it seems that in 1218 it was already in place and was also the only crossing of the Arno river. A violent flood, a few decades later, dragged away the bridge which was quickly rebuilt in 1345, in the form that we can still admire today. Even when the city was invaded by the Nazis during the Second World War, this was the only bridge to be saved, despite the fact that many of the medieval elements that characterized its two sides were destroyed. Ponte Vecchio is characterized by the shops that are placed on the bridge, especially those of goldsmiths. 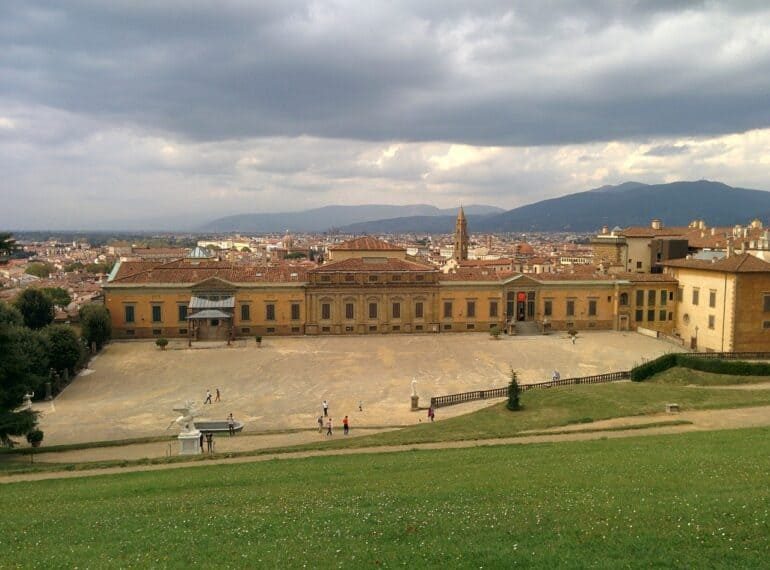 Palazzo Pitti one of the largest in the whole city. The palace was designed by Brunelleschi in the mid-15th century, on commission from the Pitti family. Initially its dimensions were much smaller, but about a century later it was acquired by the Medici family who made it their own residence and immediately worked to expand its spaces. Inside Palazzo Pitti, you’ll find the Royal Apartments with furnishings dating back to the 19th century, the Treasury of the Grand Dukes with a collection of precious objects belonging to the Medici family, the Palatine Gallery with paintings between the 16th and 17th centuries, the Gallery of Modern Art with an important collection of paintings from the last two centuries, the Porcelain Museum and the Museum of Fashion and Costume with clothes created in the last 300 years. 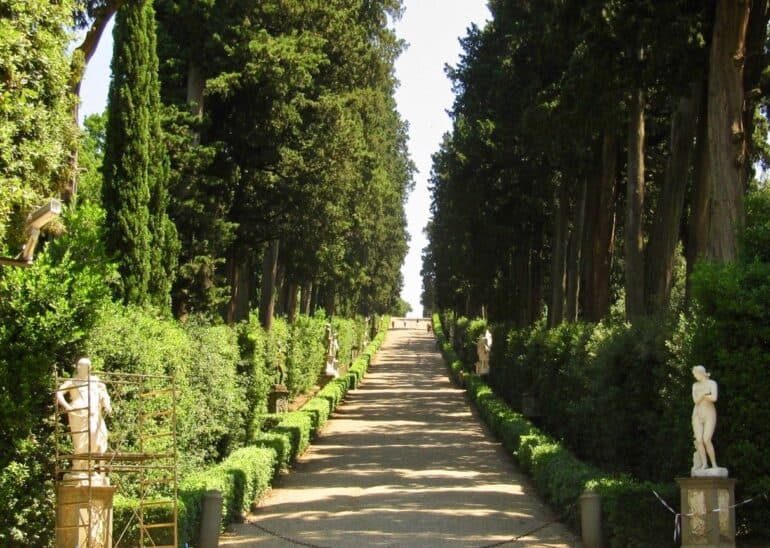 Palazzo Pitti overlooks the Boboli Gardens, which can be visited by purchasing a separate ticket. This garden represents the largest green area in the entire historic center of Florence and was born in 1549, when Cosimo I de ‘Medici asked for its design. The gardens are a set of green spaces and ponds, which are interspersed with more particular spaces such as the Roman amphitheater with the Egyptian obelisk, the Buontalenti cave and the Ocean Fountain.The Boboli Gardens are quite large and can take up to three hours to visit. After this green space was built, it became the example for the design of many other gardens, such as that of Versailles. 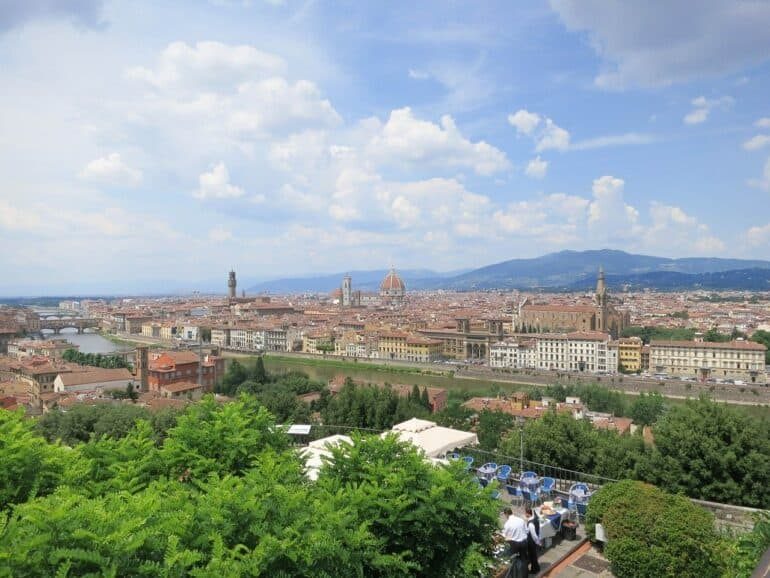 If you still have some energy and want to enjoy a spectacular view over the city of Florence, the time has come to walk to Piazzale Michelangelo. The distance is just over a kilometer and a half and to reach it, simply return to the Lungarno and continue east. Piazzale Michelangelo dates back to 1869 and was conceived during a major renovation of the city walls. This space was named after Michelangelo because the initial idea was to exhibit his works here, such as the David who remained in Piazza della Signoria (until replaced by a copy). 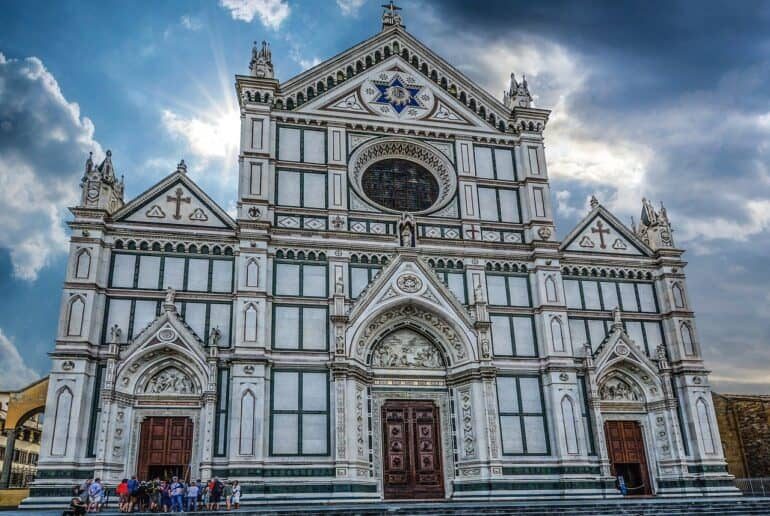 Another must-see church is the Basilica of Santa Croce, right on Piazza Santa Croce, built at the end of the 13th century and reflects the Gothic style of the time. The building was erected on a previous church which occupied this position. This church was hit by the terrible flood in 1966 and there is still a commemorative plaque that indicates where the water level reached during that phenomenon. Thanks to the flood, however, it was possible to discover the remains of the original structure of 1212, commissioned by San Francesco d’Assisi. The current church, however, was built at the end of the same century. The Basilica of Santa Croce represents the largest Franciscan church in the world and is probably the only one founded by the same saint.

Check out more things to do in Florence