Where to see Borromini’s architecture in Rome

The Counter-Reformation Popes hired artists in a mission to amaze and win back believers. Up there with Bernini – and some might say surpassing him – is Borromini, one of the greatest architects of the 17th century. ’ Their paths often crossed. Sometimes the two geniuses were engaged on the same project. On other occasions the work of the one is positioned adjacent to the other’s, making Rome the theatre to Western Art’s most intriguing artistic rivalry. 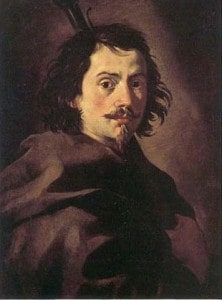 A stone-carver’s son, he first worked in Milan. Changing surname to Borromini, after lately-canonised Carlo Borromeo, he then joined relative and papal architect Carlo Maderno in Rome. When Maderno died, Bernini, a sculptor, was appointed in Maderno’s place. This did not prevent Borromini providing, in the design of Saint Peter’s baldacchino, albeit mostly unaccredited, some of Bernini’s best touches. Rivalry continued with the building of Palazzo Barberini, after which Borromini determined to set out on his own. The result is the astounding San Carlino. Other buildings followed. Yet after a man was found dead in San Giovanni in Laterano where Borromini was working, the architect never regained Papal favour. Bernini, a smooth operator, was able to weather scandals of his own, but Borromini, one of nature’s melancholics, was of different stuff. Like Hiram, builder of Solomon’s Temple, he died falling on his own sword. His resting place is a slab down from Maderno in San Giovanni di Fiorentini, before the altar he helped design and downstairs from a Bernini statue in the church museum. 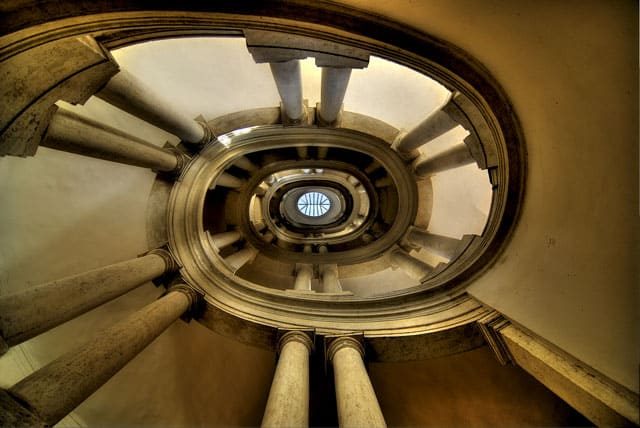 Bernini’s conventional, if monumental, staircase is outdone by Borromini’s geometry-defying double helix the other side of the building. 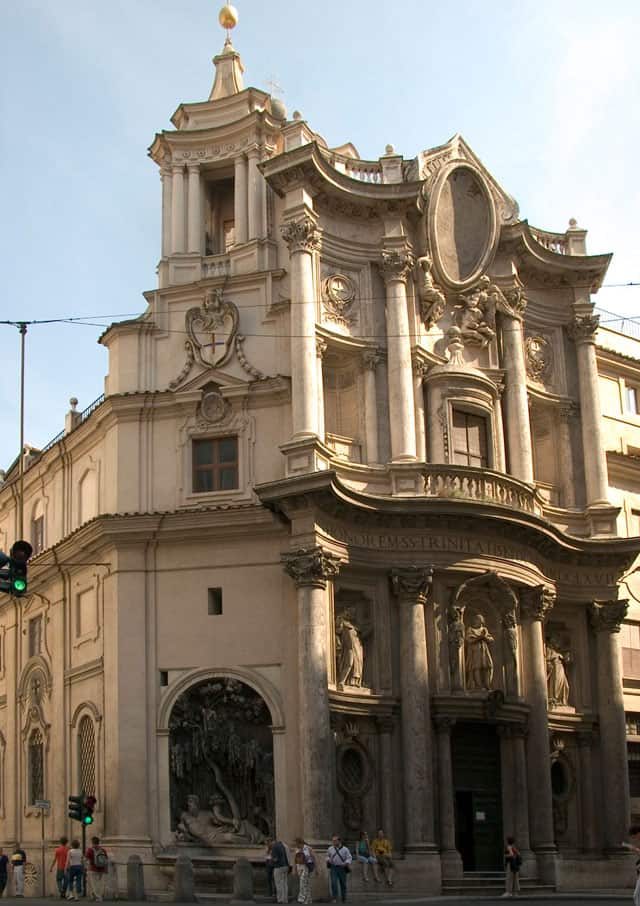 ‘The greatest building ever built’ enthuses American architect Frank Gehy. The more so given the minimum resources of Borromini’s patrons – the Order of the cash-strapped ‘Barefoot Trinitarians’. Proving less is more, geometrical wizardry makes a ceiling scarcely bigger than a downturned bathtub seem a second heaven. Shakespeare’s ‘I could be bounded in a nutshell and count myself king of absolute space’ here finds its perfect application. Equally impressive are the church’s bendy facade and then the courtyard next-door, exquisite down to the minutest detail. As if this is not fascination enough, for a comparative study in genius a short walk down the road is Bernini’s San Andrea in Esquilino. 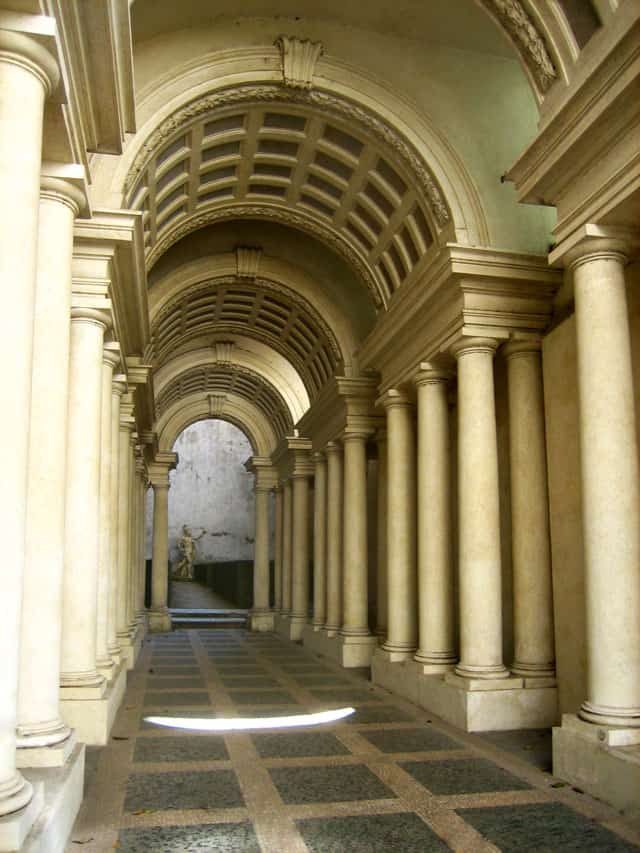 Though positioned outside the entrance, the gallery is arguably the Palazzo Spada’s star exhibit. Working on mathematical calculations by Augustinian friar Giovanni da Bitonto, Borromini’s equivalent of Bernini’s Scala Regia teases the eye of the beholder: That 37 meter tapering colonnade measures in reality a mere 8.8 metres; Mars’ giant statue at the end is little higher than a figurine. 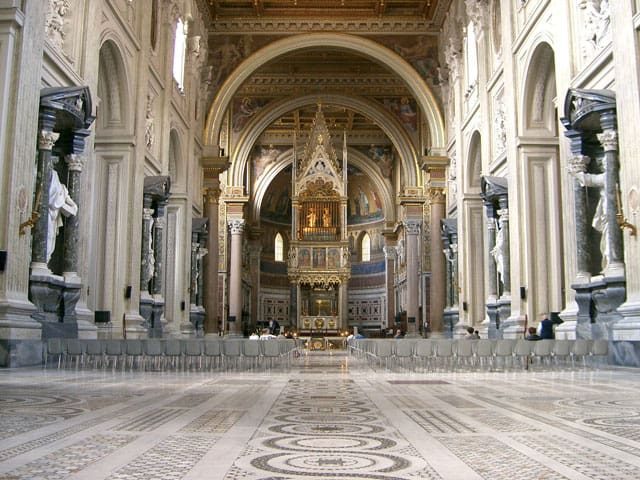 1650 was the Giubileo. Pope Innocent, keen to make his mark as Pope Julius had done with the rebuilding of Saint Peters, hired Borromini, architectural trouble-shooter sans pareil, to give the then run-down ‘cathedral of Rome’ a makeover. Stiff deadline and Papal interference notwithstanding, Borromini rose to the task. So, to celebrate the occasion, in the two side naves throng droop-winged seraphim while others with wings spread wide ring sections of the ceiling. Each nave 130 metres long, as large as San Carlino is small, here are two of Rome’s most enchanting spaces, soft grey surfaces a foil to the light flooding through strategically placed windows. In the main nave ‘pillars seem to grow out of the floor like thick trees’ to quote one expert. In between – each crowned with a dove and olive branch – the Pamphilji family emblem – rear 12 green-marbled tabernacles, built by Borromini to be filled decades later with giant statues of the apostles.

The complex could have been Borromini’s masterwork. Only that Innocent strictly forbade Borromini’s plan for a vaulted ceiling to replace the splendid but anomalous wooden one built the previous century. Another obstacle was the discovery on the church premises of a dead man, evidently his having been beaten to death by Borromini’s workforce. Borromini, as supervisor, could not help being implicated. Whatever the truth, he was let off with a sentence of ‘three years exile’ in Orvieto, never actually served. Those cherubim must have pleaded on his behalf. 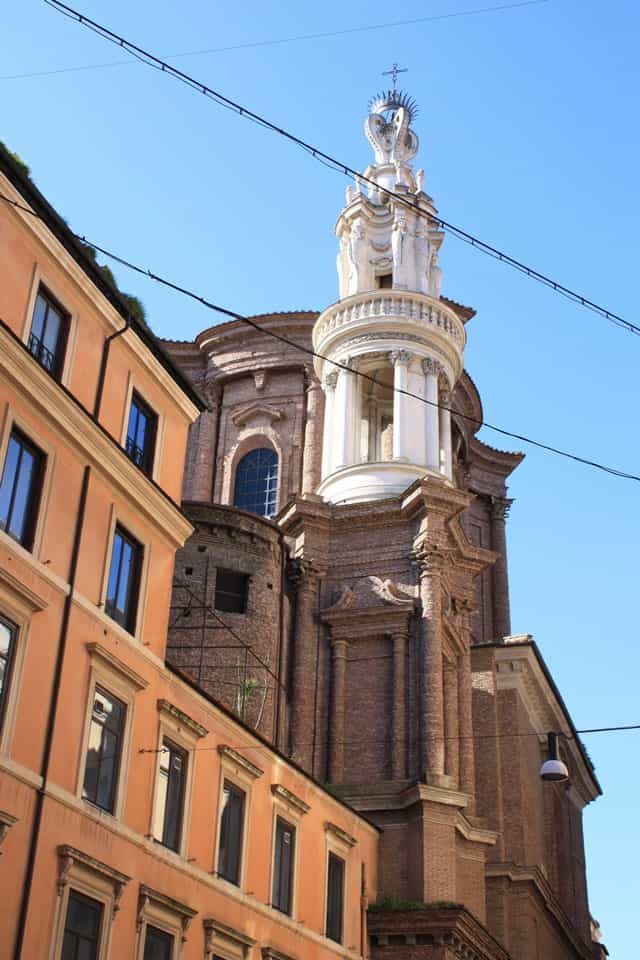 Sit yourself outside the corner cafe beneath and gaze up at the Campanile. Offset by the brick drum of the church’s unfinished dome eight angels keep watch against anything untoward on the horizon. One writer calls Borromini’s work ‘an over-decorated bowling pin’. Except, aspiring inexorably upward, this pin comes topped with cross and flaming crown. 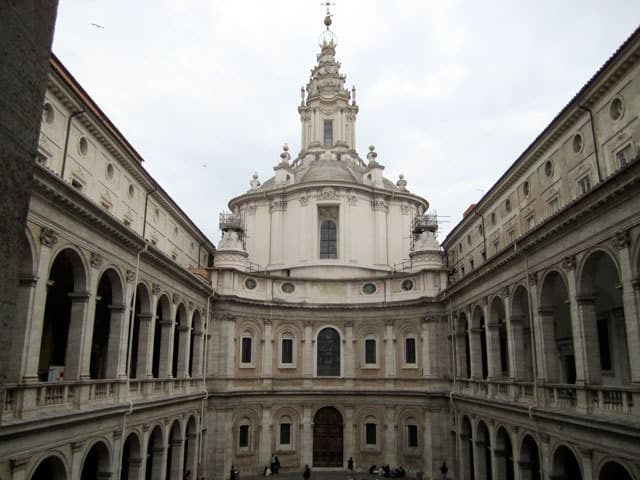 Some see the spiralling church roof as being inspired by the Tower of Babel; others name it ‘il puntiglione’ or giant stinger. This is a valid surmise given that a bee was the symbol, first, of the Barberini family who commissioned the university church and, second, the symbol of wisdom or ‘Sapienza’ as cited in Latina on the entrance: Or in the King James version: ‘The fear of the Lord is the beginning of Wisdom.’ Inside, meanwhile, is a symphony of concave and concave forms; up and along the so called poly-lobed dome taper 111 stars to increase the sense of height while the plain white stucco accentuates a mystical interplay of geometrical form evidently reproducing that of Hiram, builder of Solomon’s Temple. Fears of contemporaries that the dome would collapse have proved exaggerated, again Borromini’s expert assurance to the contrary winning the day. 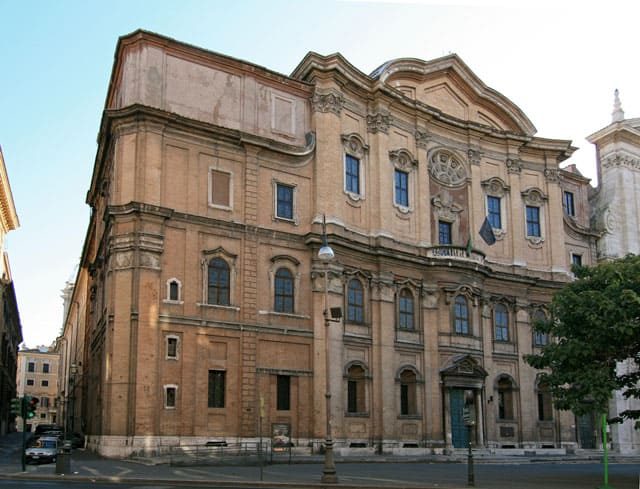 ‘BEND IT LIKE BECKHAM’ goes a catch-phrase. Borromini got there before, bending much more solid brick and marble. With a remit not to eclipse the larger facade of the Chiesa Nuova next-door, Borromini does exactly that. Borromini’s ingenious alignments of o so elastic brick suggest first a chest, then arms extending in welcome, a concept that Bernini was to take up when designing St Peters square. As proof, look for the birds which with impeccable architectural orientation line up across the building parapets in spring and autumn. 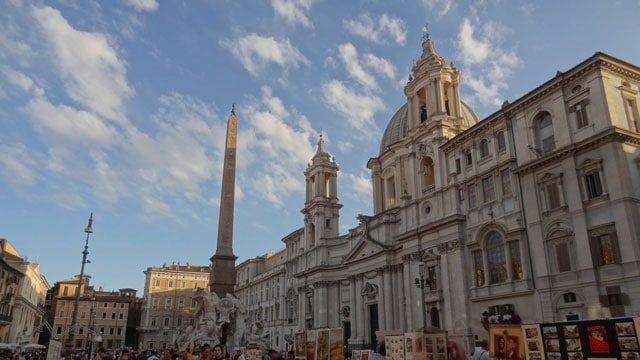 Pope Innocent wanted to turn the small private chapel next to his residence into a fully-fledged church worthy of his fountained square beneath. In building the latter Bernini tricked Borromini out of a commission. In the spirit of their bitter rivalry, one popular but chronologically impossible story has it that one of Bernini’s river statues holds up his arm to protect himself from a flaw in Borromini’s bell tower opposite. If anything, though, the church facade flows with magnanimity, convex and concave forms fully embracing the scene the below.