An evening at Rome’s Comedy Club: an 11th season with 80-something shows

There are certain events during the calendar year in Rome when the expat community expects to see large groups of English-speakers gathered together. And we aren’t talking about the endless packs of study abroad students on the prowl for Scholars Lounge Irish Pub and Disco, or the pub crawls that seemingly still exist, I thought banned what feels like at least a decade ago. Thanksgiving for example, is usually one such night. Right along with every bar in Rome’s favorite late-night party, Super Bowl Sunday.

What I didn’t expect that rainy Friday night on my way into the Ostiense Quarter to the Makai Surf and Tiki Bar just minutes walk from Piramide and Testaccio, was how huge the turnout would be for Rome’s only English-speaking comedy night. Hosted by the appropriately named, Rome’s Comedy Club, the production is the brainchild of Marsha De Salvatore and Stephanie Tyrell, and you can immediately tell they have done this before.

The evening’s comics were greeted to a packed house, the show garnering so much interest that a Sunday event for the weekend had already been added. Each comic brought their own style and unique approach, keeping the night fresh and the audience engaged and laughing. Also impressive was the number of non-English speakers in attendance, most likely dragged along by friends or significant others. Even the bald Italian gentleman sitting upfront was an amazing sport throughout. 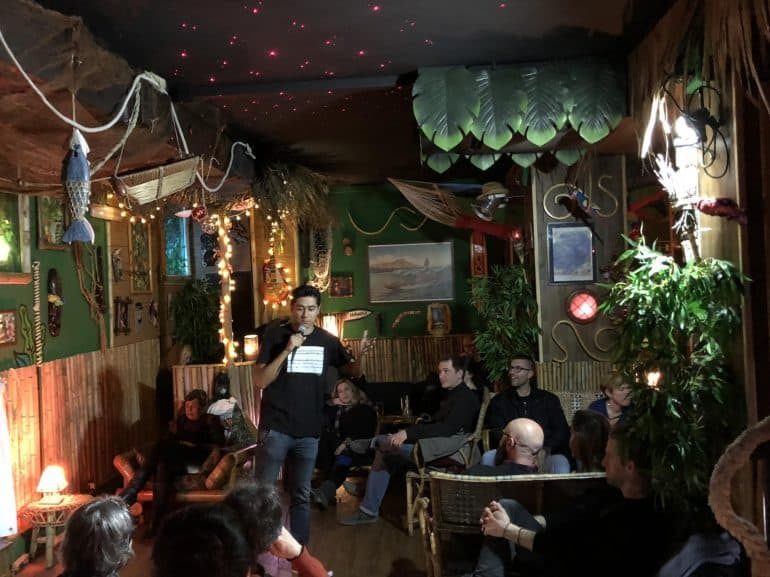 On a quasi regular basis, the sometimes brutal nuances of English language stand-up comedy flew completely over the heads of a percentage of the crowd. Due to the varying levels of English fluency in the audience, some jokes definitely made way for a few awkward silences, often leading to facial expressions ranging from the classical skeptical Italian face, all the way up to the ‘boh’ face, the verbal equivalent of shrugging your shoulders in complete lack of understanding or meaning.

But to the credit of all the evening’s performers, each comic took these looks in stride, never letting an airball linger, ready to attack again and get the crowd engaged once more. The highlight of the night was the Roman Top 10 List, a well thought out and delivered piece, highlighting some of Rome and the Roman’s most interesting idiosyncrasies through the eyes of an expat. 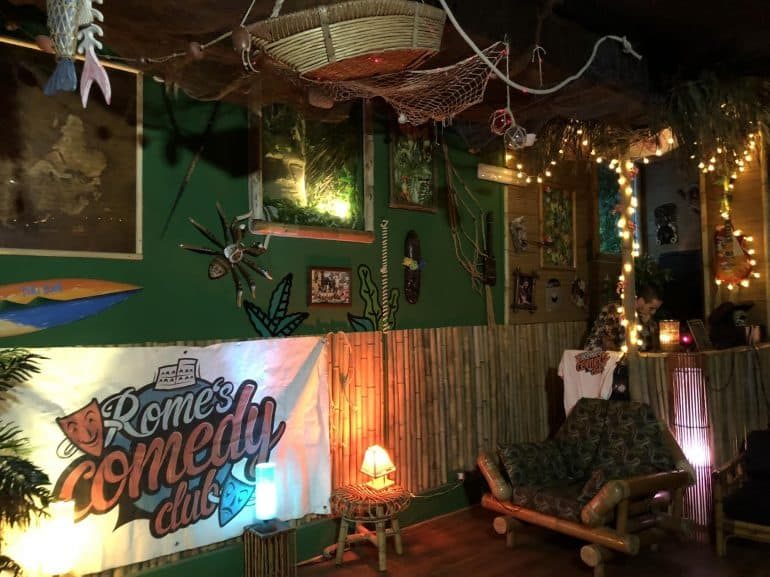 The bar staff and management from the Makai Surf and Tiki Bar were nothing less than professional and gracious with the crowd, even helping me to retrieve my lost scarf. For an evening out sharing laughs with fellow expats and English speakers of all nationalities, the price tag of €15 euro, which included a wine or beer at the bar, aperitivo and the show. And not just for the comedy show itself, but also for the conversations and antics that followed the show, the crowd hanging out for several hours afterwards, the bartenders constantly busy.

If you are interested in more information about Rome’s Comedy Club or any of their upcoming events, like everything these days, you can find it on their Facebook page. The season kicks back on September 27th, 2019, with shows in program for October 25th and November 29th as well (marking more than a decade since the first show)! This year’s roaster will include Marsha Cincinnati, José A. Salgado, Erik Bolner, Eric J. Lyman, Daniele Fabbri, and Kenny Dunn as their MC. NEW to the Rome Comedy Club stage is Rant Rega!

Surely tickets will be selling quickly! Bookings can be made via Whatsapp at 339.751.4140 or at makairoma@gmail.com This year they gotta get things started on the earlier side, so doors open at 8pm and 9.15pm is showtime!