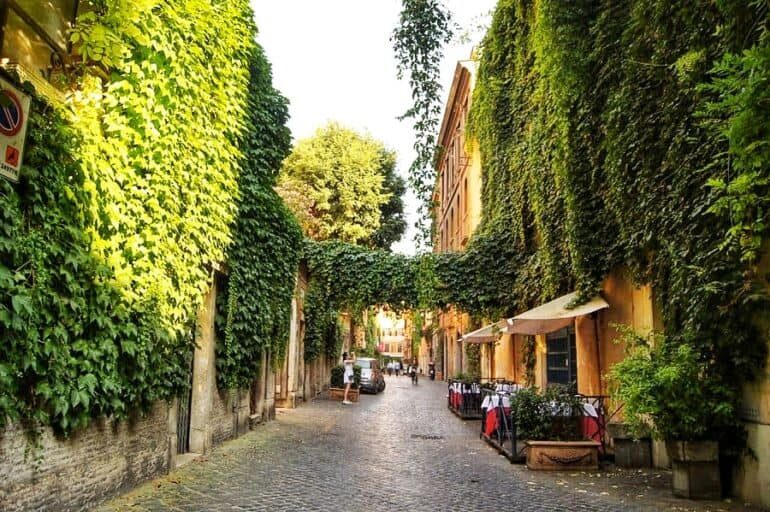 The Laneway of Artists and Art Lovers

In the midst of the bustling squares and streets around Piazza di Spagna and Piazza del Popolo lies a short street called Via Margutta, accessible through the blocks of Via del Babuino. Most notably recognized as the center of where Audrey Hepburn and Gregory Peck lived and shot the award-winning film ‘Roman Holiday’, this narrow and picturesque street is also known for its rich history dating back to the 17th century. In the early years of Via Margutta, this street housed the finest craftsmen, workshops and stables. Due to these flourishing businesses, many foreign artists (Flemish, German) and those from other regions in Italy sought out a life on this street, and contributed to the street’s history as an art hub.

Famous names such as Federico Fellini, Giulietta Masina, Renato Guttuso were also residents of this street at one point. Other than the arts, this street also housed studios where composers such as Debussy, Liszt and Wagner worked. Today, this quaint lane hosts an array of art galleries and antique shops.

Not to mention, Via Margutta has some of the most breathtaking vine-covered edifices in all of Rome. Get your daily dose of green here!

If you are looking for something to spice up your wall, check out this cute art store between Naman Hotellerie and the Hotel Art for some gorgeous paintings!

The entrance to this courtyard is a little hard to find, but it is worth the search as the Cloud Modern Art Gallery is just at the end of the yard.

The Fountain of the Arts pays tribute to Via Margutta’s layered artistic history, featuring a bucket of paint brushes and a duo of faces showcasing the two key moods of all artists: happy and sad.

Continuing the artistic legacy of Via Margutta, the entryway to this movie studio is enhanced by this wall featuring a sculpted face.

“I Cento Pittori di via Margutta” (One hundred Painters of Via Margutta), is a must see open-air art exhibition that takes place in October. The annual event is free of charge featuring over 100 Italian and International artists organized by a society called “Associazione Cento Pittori via Margutta” since 1953. 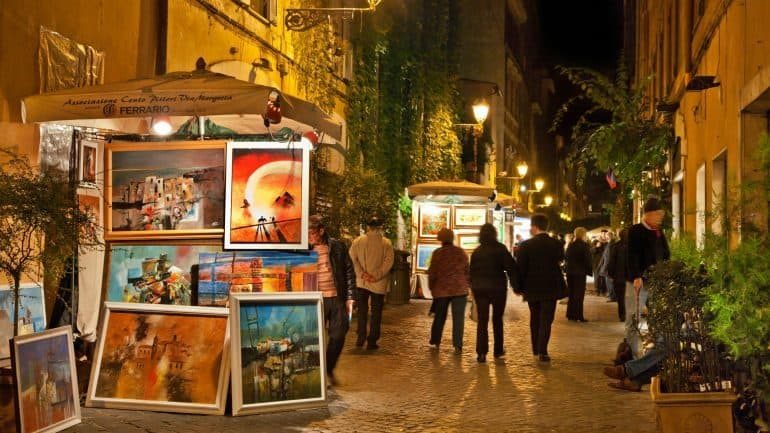 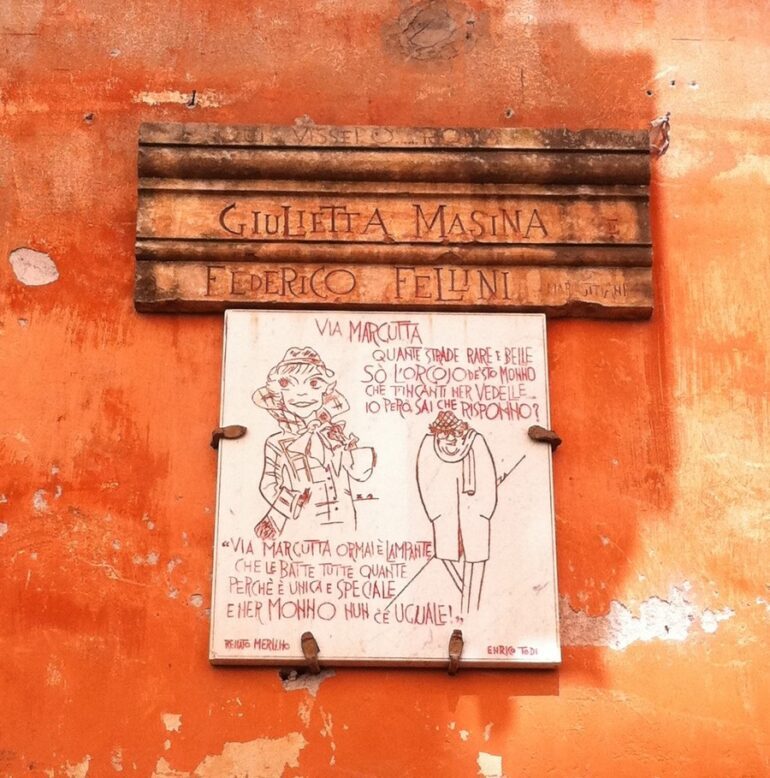 This peek through the window of Sesto Senso Art Gallery is not a substitute for actually going in and being entranced by the art on display.

Take the time to visit Via Margutta 53b, the studio used by Pablo Picasso in 1917 where he worked on Jean Cocteau’s play Parade.

Margutta 51. This apartment area was the location of where the film, ‘Roman Holiday’ was shot. The courtyard was not featured in the movie but is worth strolling around. Fans of the film would be able to recognize the locations around this vicinity where several scenes were shot. 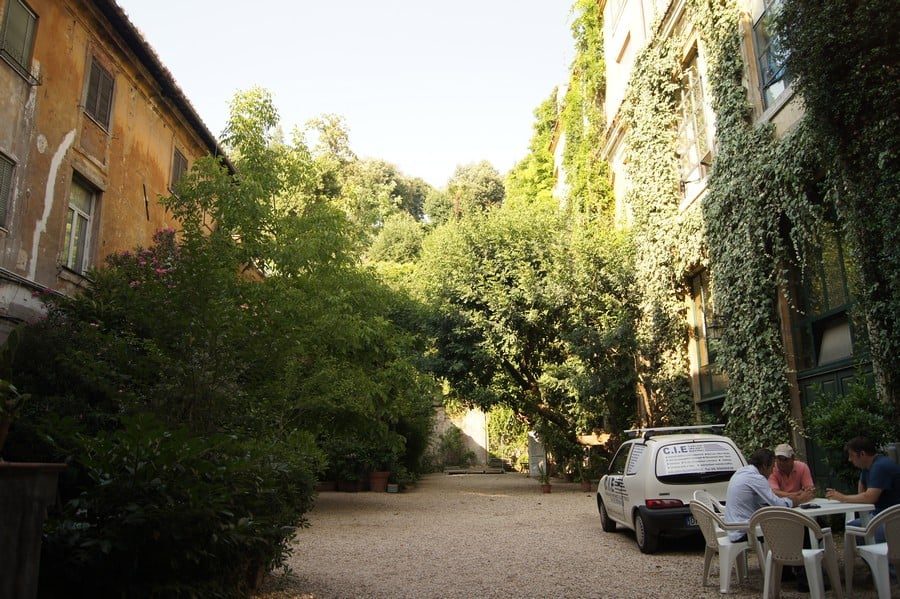 Mario Oasi Antichita’. This shop has the finest collection of antiquities dating back from the 17th century. Many of the antiques stored in this shop came from palaces and mansions of noble families from France, Germany and Italy. It’s worth stopping by just to have a look, as it will spark your imagination and show you how the wealthy lived once upon a time ago.

L’Art Gallery Dicò. Next to Hotel Art lies an art gallery owned by Roman artist Enrico Dicò. His contemporary artwork is a combination of techniques using acrylic, plexiglass, neon, resin and combustion with images of notable names as backgrounds. Enrico Dicò has also exhibited his artworks in Miami, Monte Carlo and Rome.

Osteria Margutta. In need of fuel after a long day of exploring? Head down to Osteria Margutta and dine among the vines. This restaurant serves traditional Roman dishes with a hint of original flavors to spice up your taste buds. 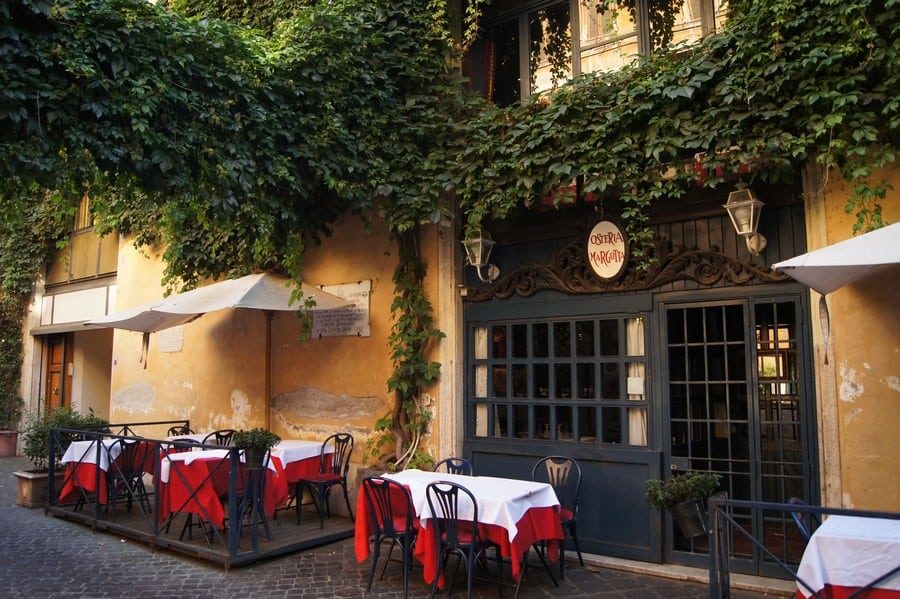