Rome is known worldwide for its fascinating open-air museum, boasting thousands-year-old monuments, ruins and architecture. So much so that each year millions of tourists flock to visit the stunning archeological treasures the Eternal City has to offer. But in addition to visiting these colossal structures, you can now relive ancient Rome in a completely different way thanks to these 5 virtual reality experiences that allow visitors to immerse themselves in the glorious days of the Roman Empire and witness the monuments the way the were 2000 years ago. From augmented reality experiences to multimedia shows, get ready for the famous ruins to come back to life with these 5 immersive experiences in Rome. 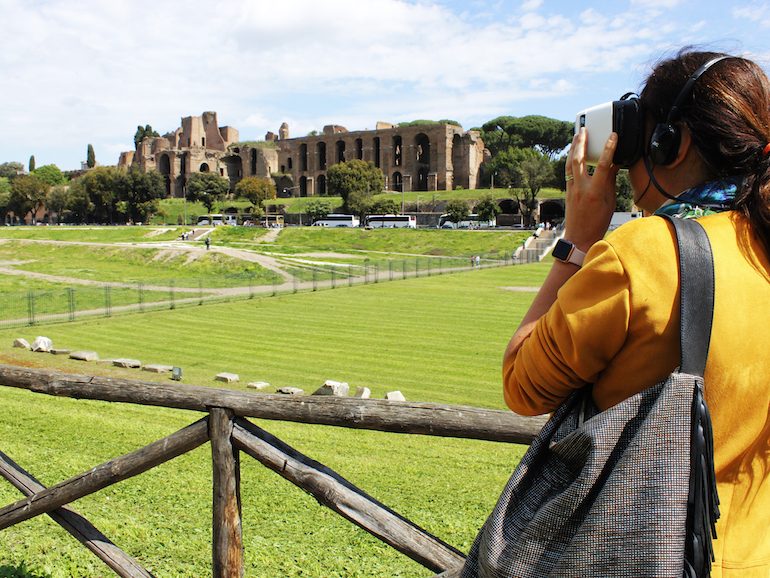 There is little left of the famous Circus Maximus, once the heart of Roman entertainment and a social hub for the city. But with the Circo Maximo Experience, everything changes – the cutting-edge project allows us to see into the past and experience Roman life at the famous arena, using interactive display technologies never before realized in an outdoor area of such large dimensions. The immersive experience takes us on a journey through time, seeing the Circus Maximus evolve from the origins of Rome to the current day: from a simple green valley, to the area’s first primitive arena, to the splendour of Roman imperialism and beyond. Zeiss VR One Plus viewers with iPhone-type smartphones and stereo earphone systems create a truly unique experience, with reconstructions of every period overlapping with the view of the site as we see it now and bringing the famous ruins to life. The 40-minute walking itinerary is available in eight languages (Italian, English, French, German, Spanish, Russian, Chinese and Japanese) and is a must-have experience for anyone wanting to relive the splendours of the Circo Massimo.

Daily
Arch of Constantine
9am or 11am
From €43 (inclusive of skip-the-line tickets into the Colosseum)
romeing.it/shop/product-tag/virtual-reality/ 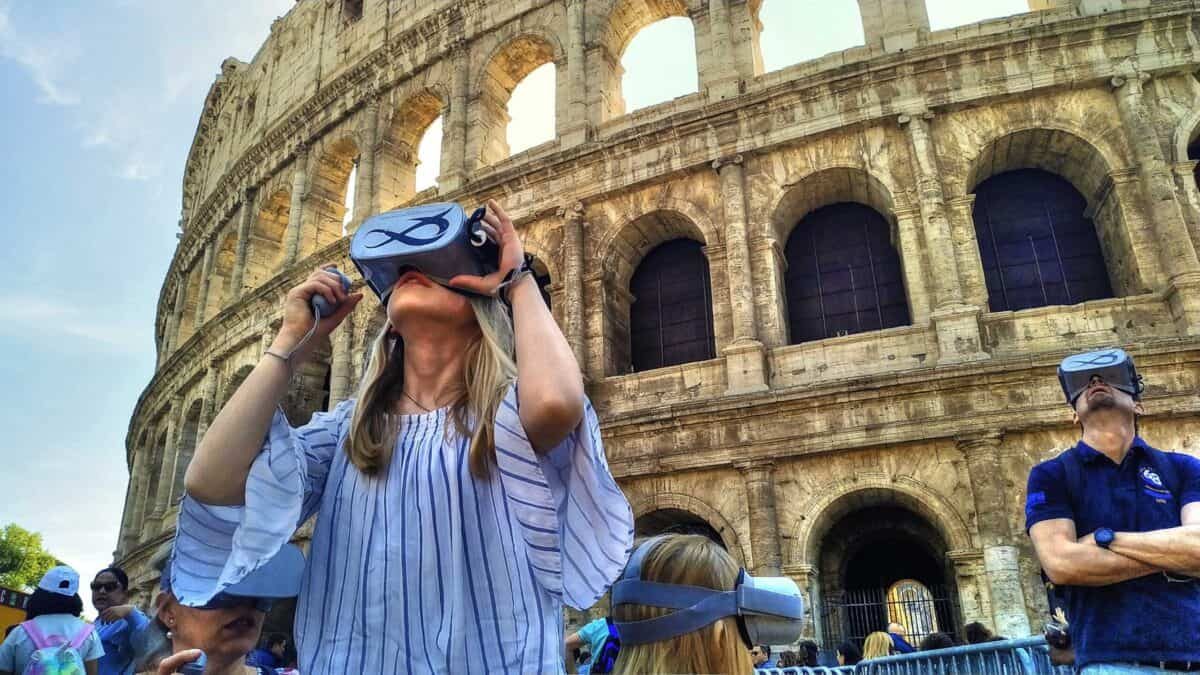 It’s not always easy trying to imagine how things looked like thousands of years ago. And this goes for wonderfully preserved monuments like the Colosseum as well. As many know, the Colosseum was once a stadium for gladiator contests and public spectacles like animal hunts, land and sea battle re-enactments, executions, and dramas. But how was the Colosseum really 2000 years ago? With the new animated and interactive 3D reconstruction, you can now live the Colosseum like it was back in the day. With this Colosseum Virtual Reality experience, you’ll get a skip-the-line ticket into the Colosseum Archeological park plus last generation Samsung Oculus VR to virtually immerse yourself in ancient Rome. You will virtually walk in the ancient square admiring the gilded bronze statue of Nero. While inside the arena, you will immerse yourself between the roar of the lions and gladiators fighting; as well as into various 3D corridors of the mysterious underground area of the Colosseum (typically overlooked by tourists) where slaves prepared the shows and impatient and hungry animals were ready to be let into the arena. It will be unlike any experience you’ve ever had, equipped with an audio guide in English, Italian, German, Spanish, Portuguese and French. 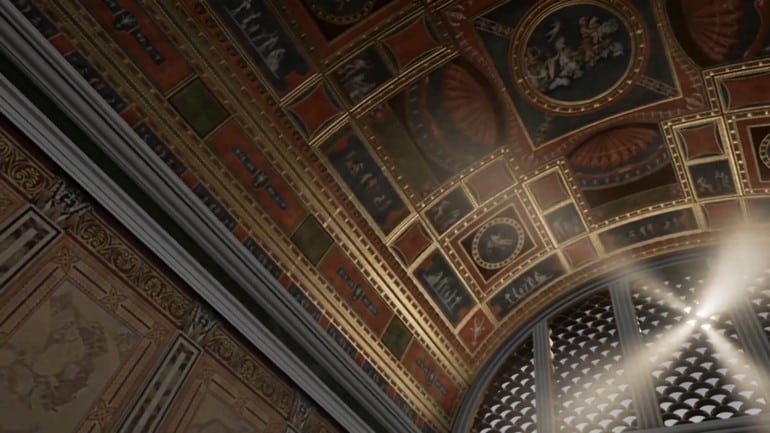 Erected by Emperor Nero in 64AD, the Domus Aurea, also known as the Golden House, was an opulent imperial residence that sprawled from the Palatine Hill to the Colle Oppio and Caelius Mountain, spanning one square mile. At its peak, the Domus boasted gardens, woods, and even artificial lake; statues hailing from Greece and Asia Minor adorned its rooms; gold and marble quarried from Egypt and the Middle East covered walls and vaulted ceilings; and even a grandiose, octagonal chamber with a domed roof graced the grounds, built sixty years before the completion of the Pantheon. The palace was inhabited until it was damaged in 104 AD by a wildfire. It wasn’t until the the 15th-century that excavators first stumbled upon the Domus. Legendary artists of the Renaissance, Raphael among them, made pilgrimages to the site, studying and later recreating the Domus’s motifs and designs in their own work. Fast forward to the present century: after extensive renovation, the palace finally opened its gates to visitors in 2014 offering virtual reality tours. With the aid of visual headsets, the 3D, multimedia experience provides a glimpse into how the Domus looked in its heyday, resurrecting Nero’s elaborate frescoes.

Viaggio nei Fori – Multimedia show of the Forum of Augustus The marble blocks still visible in the Forum of Augustus are the starting point for a fascinating tour in discovery of magnificent archaeological sites and a temple that was at the heart of events in Ancient Rome. A tour created by Piero Angela and Paco Lanciano. Visitors will have the chance to see an exciting portrayal of life in Ancient Rome, reconstructed within the Imperial Fora using light, images, film and animation. The Forum of Augustus is composed of newly reconstructed pathways that tells the story of Augustus’ reign during Rome’s period of imperial expansion; a thrilling representation which combines historical and scientific rigor with entertainment. Visitors will stand on a flight of Roman stairs to watch a multimedia show portraying the history of the Forum and temple dedicated to Mars Ultor, commissioned by Augustus in memory of Julius Caesar. The Viaggio nei Fori show is available in 8 languages ​​(Italian, English, French, Russian, Spanish, German, Chinese and Japanese) will feature three 40-minute shows every evening. 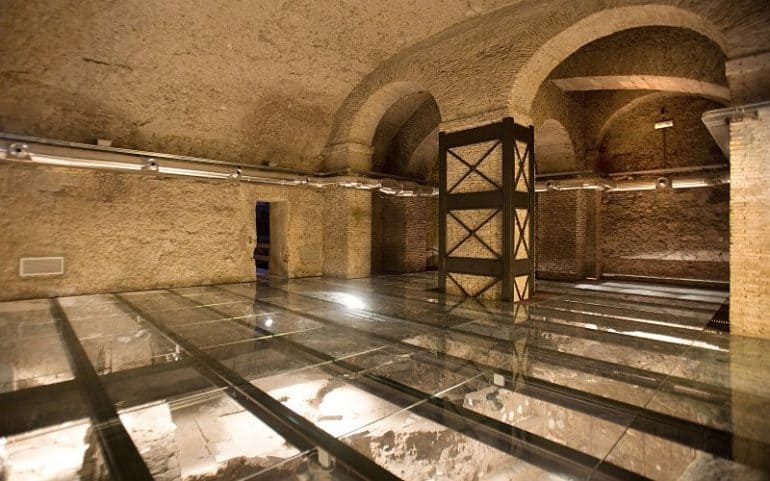 In Rome, we walk by hidden treasures everyday without giving them a second thought; however, the unassertive yet noble Palazzo Valentini’s Domus Romane is a must-see you should not ignore. The main floor is open to the public and uncovers the Domus Romane – the archeological remains of homes belonging to the wealthy families of Imperial Rome. Teams of experts excavated through layers of Rome’s rich history, and created this stunning multimedia museum in 2010. The tour of the Domus Romane is a mix of history and wonder: exquisite relics of finely detailed mosaic floors to colossal marble columns, and vast kitchens to private saunas are displayed beneath your feet. The glass floors allow you to look down into the superior archeological relics while the enchanting lighting and knowledgeable guide bring them back to life. The comprehensive tour walks you through the design of the Trajan column, as well as the history of the Roman Empire, tempting you to visit the real thing just outside.