Discovering the Jewish Quarter in Rome

Discover the Jewish Ghetto turned hip central quarter where boutique stores and kosher restaurants sit alongside picturesque historic buildings belying an enticing and rich history of the Jews in Rome.

The Jewish Quarter in Rome is a great spot to partake of delicious fresh bread or a traditional Jewish-style fried artichoke (carciofi alla giudìa). As you enter, on the east bank of the Tiber, the streets begin to huddle around you. Curious markings and talismans adorn the walls and men in black caps with ringlets mix with the other locals. Recently gentrified, Kosher is now chic here. Old and new mix to create a bustling neighbourhood quarter with boutique stores. 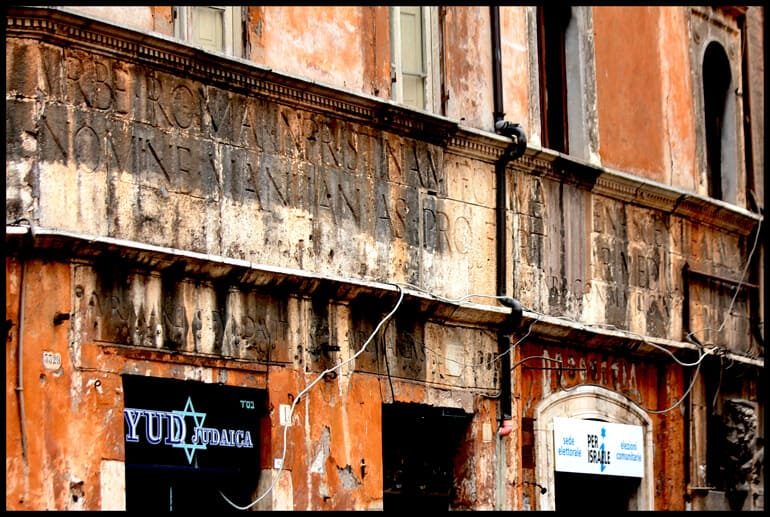 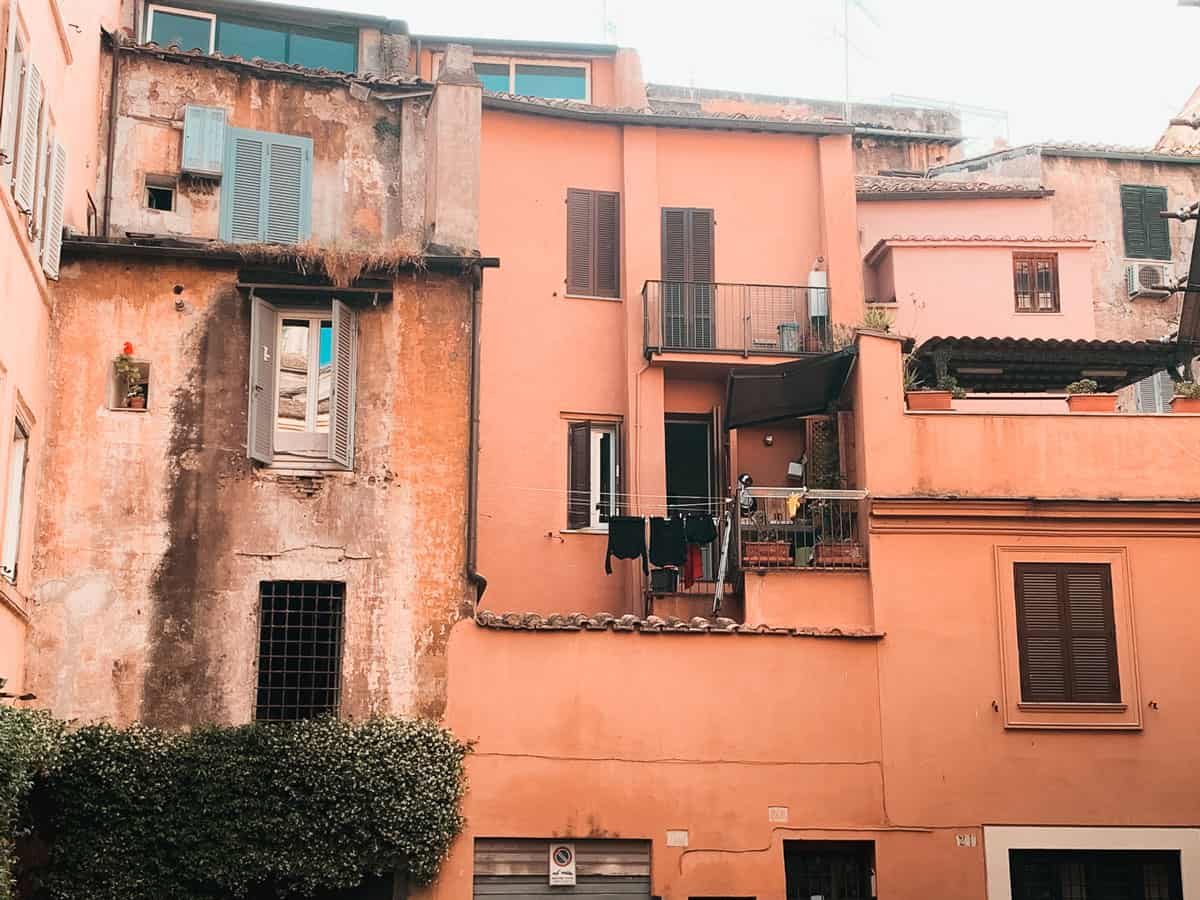 In the Jewish Quarter residents now hang their clothes in their much coveted apartments in the arch of ancient ruins, but their history in Rome is also much darker than many might realize.

Denied the right to live where they pleased in Rome, Jewish people were sent to the smelly and flooded fish market where the fashionable Jewish Quarter now stands by Pope Paul IV in the 16th century. Churches were built on every corner affecting a physical and religious barrier.

As a result of being unable to partake in trades such as art making or metal casting, the Jewish community started money lending. Today, a large percent of the shops in Rome are owned by Jewish Romans, and the Jewish Ghetto is one of the most vibrant and beautiful neighborhoods in the center.

Where is the Jewish Ghetto located in Rome?

In the historic center, nestled in between the Tiber River, Campo de’ Fiori and Piazza Venezia, and just a short walk across the bridge to Trastevere. In this fantastic area often overlooked by tourists, you’ll get to see some outstanding monuments and buildings. Step inside the Great Synagogue and the Jewish Museum of Rome to learn about one of the oldest Jewish communities in Europe. Walk past the beautiful Portico d’Ottavia, Teatro di Marcello and the marvellous Fountain of Turtles. And while you’re at it, stop by for lunch or dinner to have a taste of Roman Kosher cuisine, one of the best in the capital. From the Jewish-style artichokes (fried) to the abbacchio and delicious sweets, you’re surely going to go back to the Jewish Ghetto of Rome to taste some more delicious Jewish cuisine! 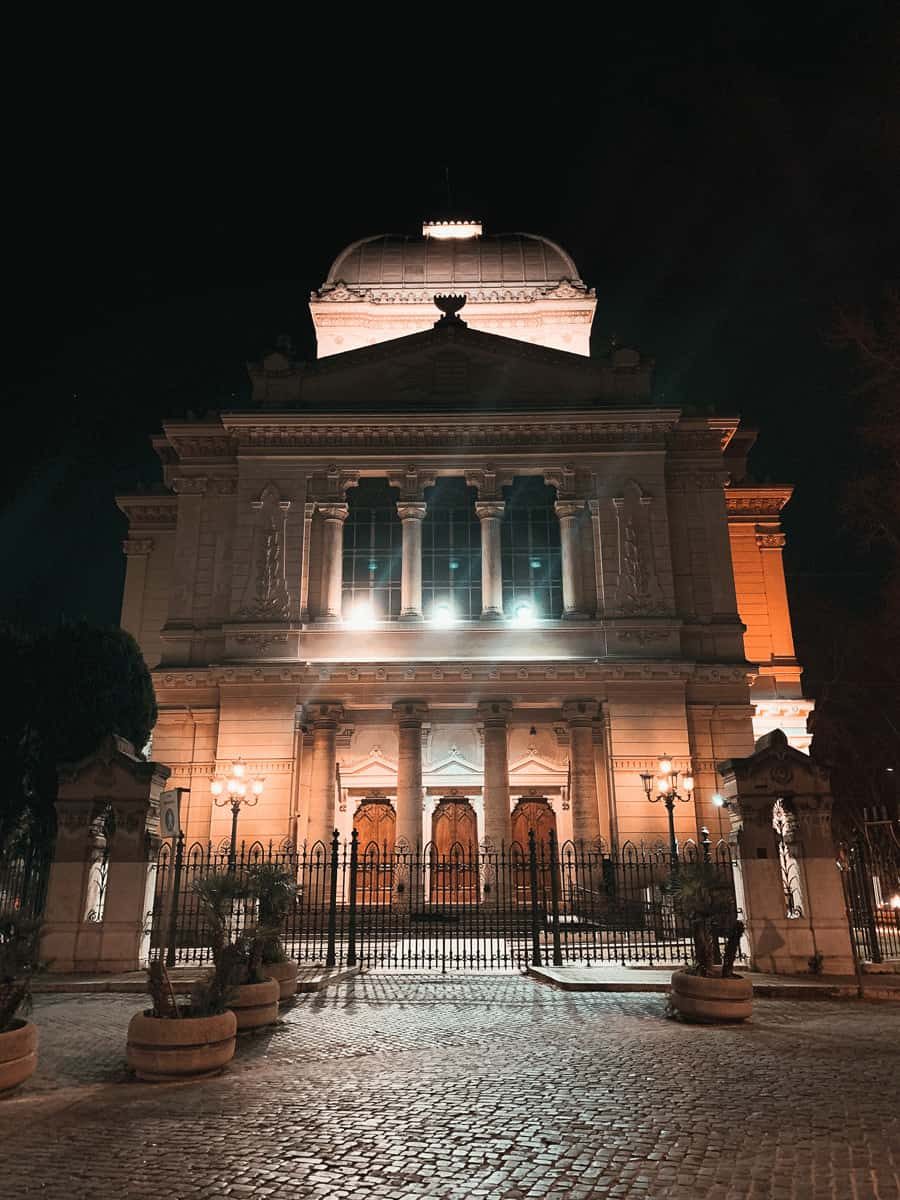 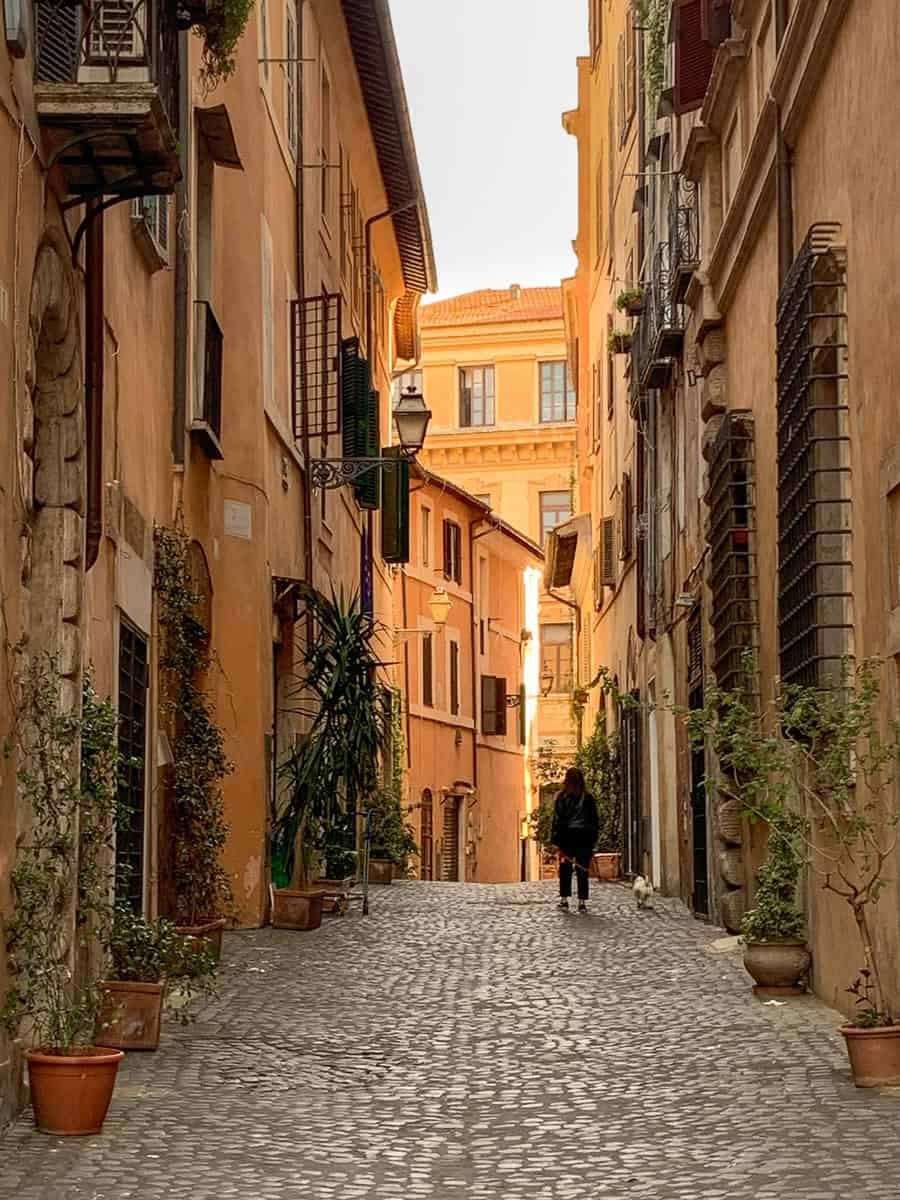 Best Things to See and Do at Rome’s Jewish Ghetto 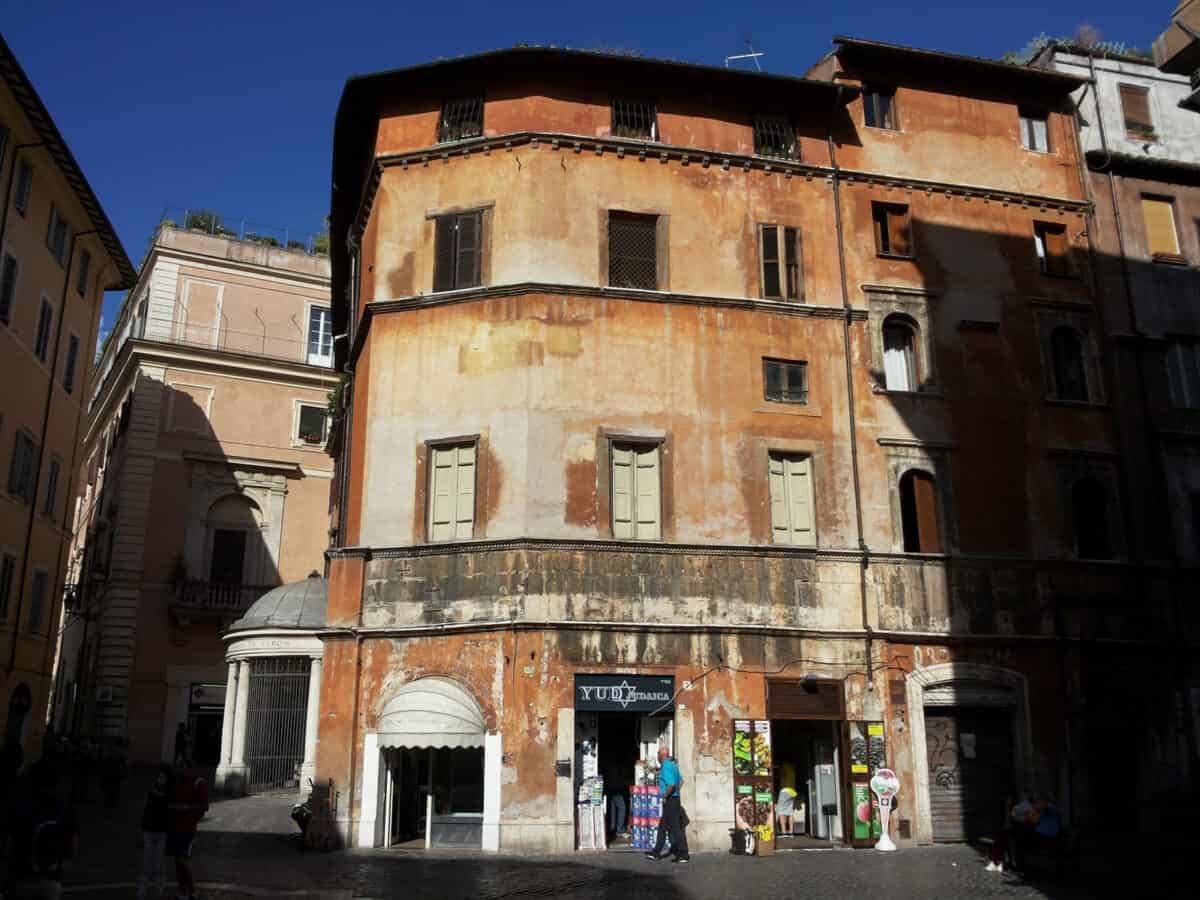 Rome has one of the oldest Jewish communities in Europe, dating back to the II century B.C. While in the past the Jewish Ghetto was surrounded by walls where Roman Jews would live in very small spaces and often in terrible hygienic conditions, today the Ghetto is one of the most beloved areas of Rome; popular for Romans and tourists alike and famous for great food in typical restaurants. Embark on a journey back in time, discovering this characteristic neighbourhood of Rome. 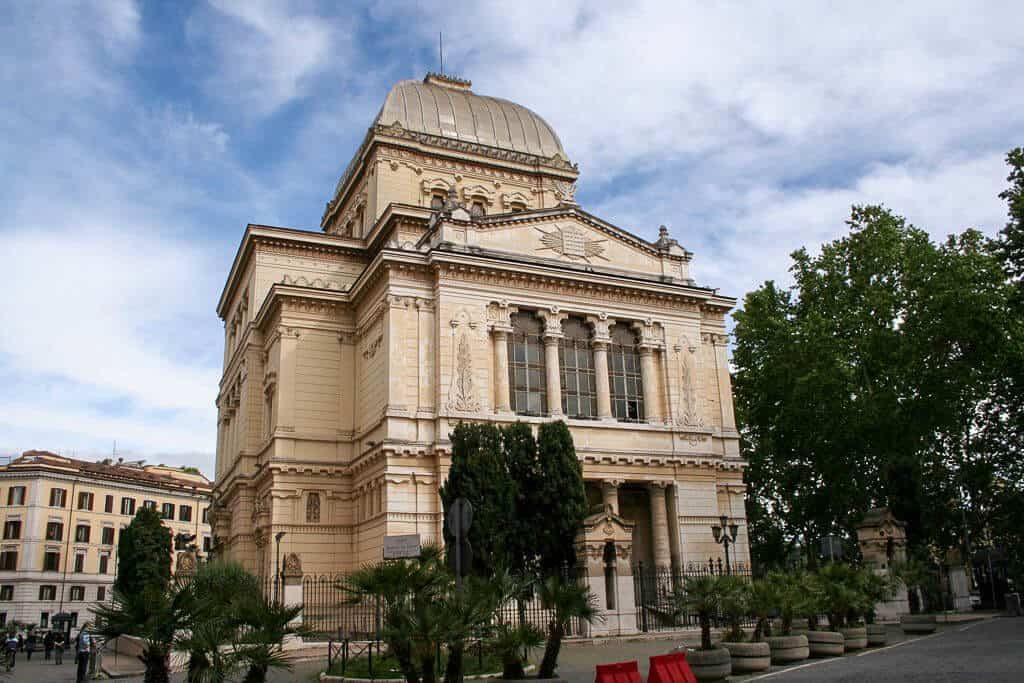 The Great Synagogue & the Jewish Museum of Rome

The glorious decorative Great Synagogue of Rome or the Tempio Maggiore di Roma was inaugurated in 1904. The monumental building is surmounted by a square-based dome, which is covered in aluminum. The Jewish Museum of Rome is located inside the Synagogue complex and displays silverware and textiles, a collection of artifacts, documents and photographs that span over the 20 centuries of continuous inhabitants of this unique quarter. The admission ticket allows you access to both the Synagogue and Museum.

Named after the Emperor Augustus’s nephew, Teatro Marcello (Theatre of Marcellus) is an ancient open-air Roman theatre, once home to splendid performances of music and drama. Now aged, but none the less awe inspiring, the theatre resembles that of a mini Colosseum amid an area strewn with ruins and ancient columns. Private apartments have been built atop the theatre and magnificent concerts are still held in the dramatically lit up surroundings in the summer months. 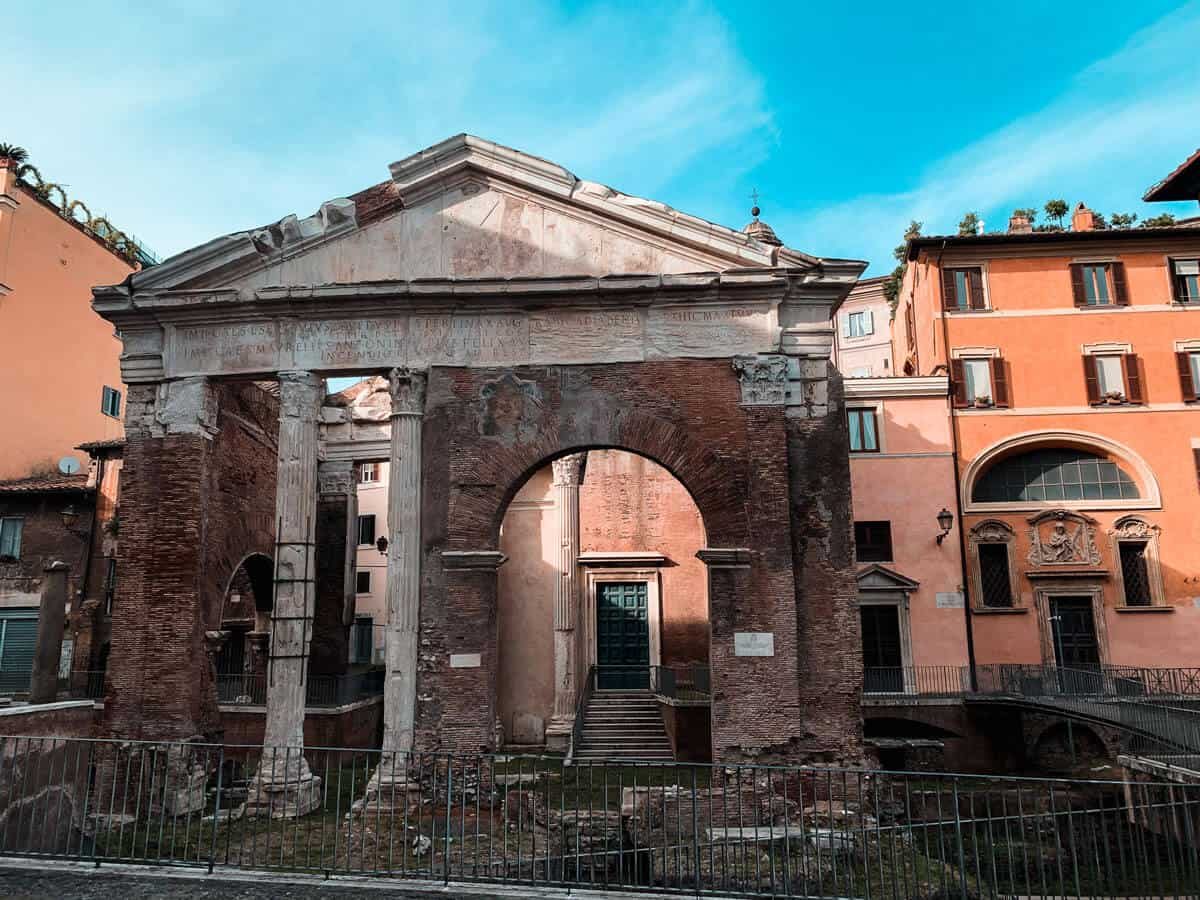 Portico di Ottavia erected in 146 BC as a grand procession way, larger than a football field, used by the emperor and his triumphant army. The marble entrance columns were later replaced with a large arch after a 5th century earthquake. From the 16th century the arch was also used as one of the four gateways of the Jewish Ghetto, which were shut each evening to secure the Jewish residence inside. A walkway below the arch now provides a superb viewpoint of the portico and Teatro Marcello.

This local, Jewish Roman library, Kiryat Sefer, which translates from Hebrew to “The City of Books” offers a wide selection of texts regarding the Jewish faith, philosophy, cooking and traditions. For bookworms and tourists alike, this place is definitely worth a neighborhood stop.

Situated in the center of Piazza Mattei, your eyes will be immediately drawn to the Fontane delle Tartarughe (Fountain of the Turtles), with young sprite-like figures each reaching to the trickling water basin above. Built in the late 16th century by the architect Giacomo della Porta and the sculptor Taddeo Landini, the fountain only gained its’ current name when famous sculptor Bernini later added four bronze turtles clambering into the fountain’s basin.

Discover the best fountains of Rome

Best Restaurants in the Jewish Ghetto 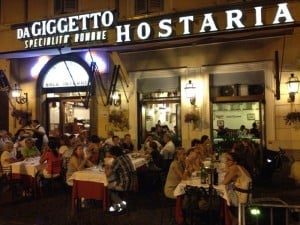 Located in the center of the Jewish quarter, this family run restaurant has been around since 1923. Still a well-known local eatery, Giggetto serves up mouthwatering dishes, including the neighborhood’s famed carciofi alla giuda, and excellent wine from nearby Frascati. 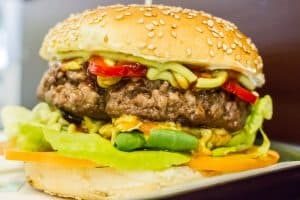 A local burger joint that serves up a range of both traditional and unique burger creations. Build your own burger with a variety of toppings, cheeses and sauces ranging from guacamole, barbecue, to bacon or eggs. 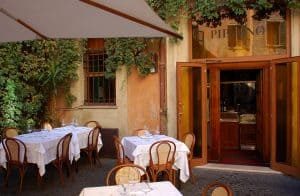 Tucked away in a quaint piazza in the Jewish Ghetto, this historical restaurant has been around since 1860, making it older than the unified Italian Republic. Now on its’ third generation of family ownership, the restaurant continues to offer exquisite, traditional dishes under the 19th century fresco painted ceilings. 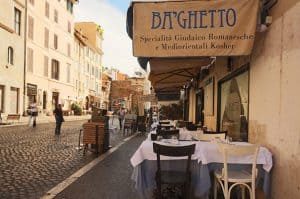 Located in the main square of the Jewish Ghetto, Ba’Ghetto has nearly become a household name when it comes to Judaic Roman cuisine. Grab a table outside and watch the sauntering foot traffic as your enjoy a generous serving of their famed fried artichoke. 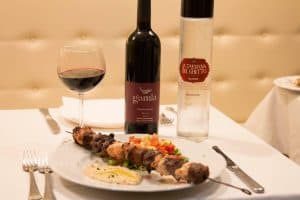 In this cozy building with exposed brick, classic paintings and even outdoor seating in a charming alleyway, this is the perfect setting to enjoy some classic Judeo Roman dishes in a charming Italian tavern. 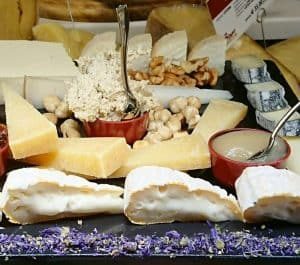 Step into this quaint cheese shop and choose from a wide selection of cold cuts, Italian and French cheeses, and homemade dishes. This place is perfect for grocery shopping locals or tourists wanting to grab a table and savor a range of local flavors. 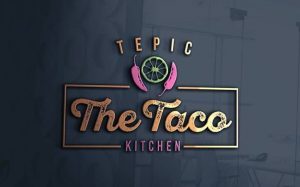 For the most authentic mexican food in Rome, look no further. You can’t go wrong with any selection of their tacos served on homemade corn tortillas, made to order guacamole and fresh salsas. 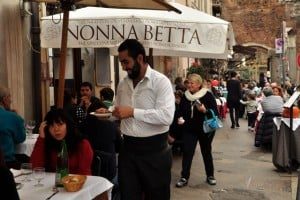 Step into this restaurant’s intimate setting and immediately feel at home. Followed by generous servings of fresh Roman Jewish food, you will feel like you are indulging in a deliciously hearty, home cooked meal. 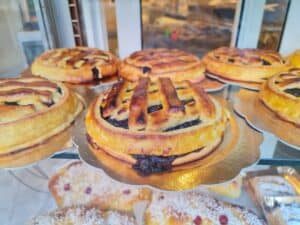 Also known as the forno (oven) of the Ghetto, this bakery serves of freshly baked goods ranging from pizza, croissants, breads and sweets from one of the neighborhood’s most historic buildings, dating back to 1468. 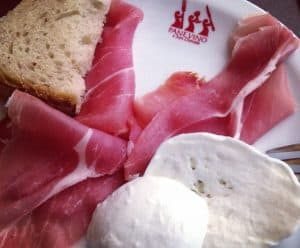 A local eatery that is a mix between a wine bar and an osteria, stop in for either lunch or dinner, or rather a chance to sample a range of Italian wines accompanied by samplings of meats. All of which are freshly sliced from the on display Berkel. 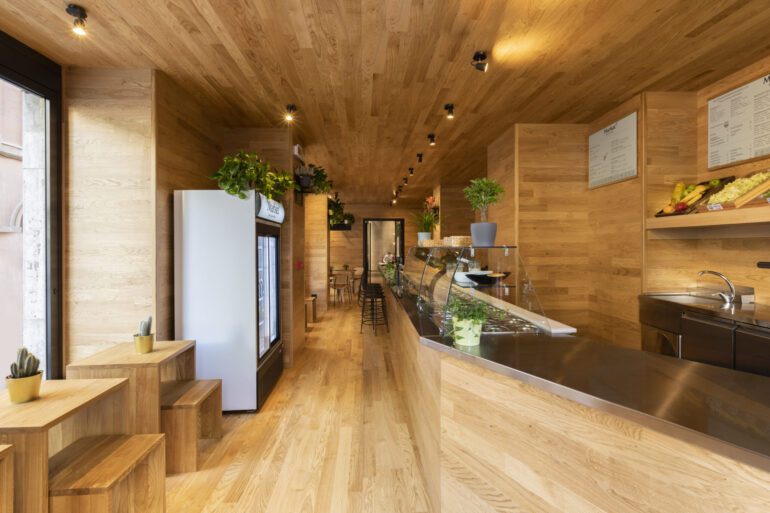 From açai and granola for breakfast, to pasta, quinoa and internationally influenced wraps during the day, Market is your new go-to for healthy eating in Rome. A unique take on hotel dining, Market combines several elements into one destination. This unique eatery is ready to serve you breakfast, lunch, dinner and every snack in between.

Best bars in the Jewish Quarter 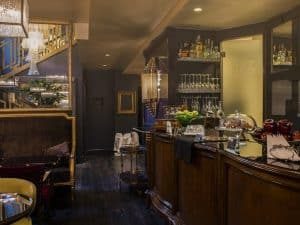 For an evening out, grab a pre or post dinner drink at this cozy, yet refined hotel bar. Choose from their selection of cocktails or their highly curated wine list, you can’t go wrong with either. 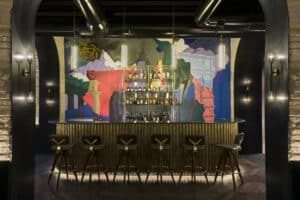 Enjoy signature drinks and classic twists on cocktails amidst industrial-chic décor and contemporary art at Hotel Chapter Roma’s bar. Cocktails, like the food, are seasonal so there’s always something new to taste depending on what time of year you are visiting. 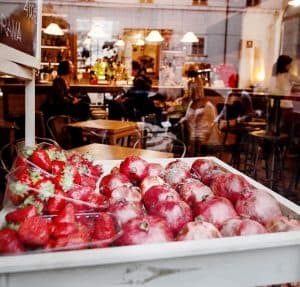 Just a stone’s throw away from the beautiful Fontana delle Tartarughe, stop in to relax at this quaint locale for your morning coffee, or a glass of wine during your evening stroll, both while enjoying the amazing piazza and fountain view. 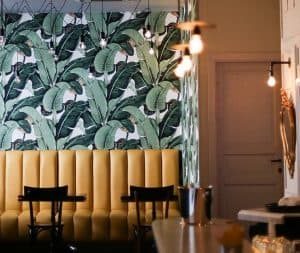 Step into this stylish bar for a glass of wine or perfectly shaken cocktail alongside a unique spread of appetizers for aperitivo.

The Order of Malta Keyhole