Summer in the Eternal City is enough to make anyone briefly entertain the idea of an illegal dip in the Trevi Fountain, Anita Ekberg-style. August’s temperatures shimmy between the mid to high 30sºC, and airconditioning is hard to come by. But with the help of some essential insider tips (and as many gelatos as you deem necessary) you’ll chill out in no time. 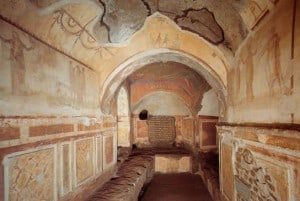 A whopping 50% of ancient Rome still lies buried beneath the modern capital, and much of it is open for exploration. Best of all, descending dozens of meters below street level means shaving some degrees off the thermometer. Wander through the Catacombs of San Callisto (Via Appia Antica, 110/126), an intricate labyrinth of underground chambers where the early Christians were buried. Basilica San Clemente (Via Labicana, 95) looms over a 4thcentury church whose faded frescos are still visible; venture down another level, and you’ll encounter a 1st-century Roman dwelling and a 2nd-century Mithraic temple. 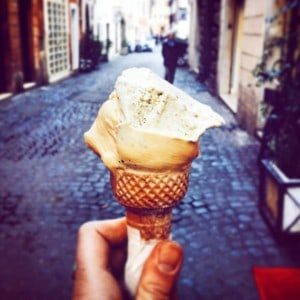 HAVE DESSERT FOR DINNER

Rome’s soaring temperatures are a great excuse to indulge in plenty of Italy’s famed gelato. Don’t waste your money and calories on the fake stuff, though – the majority of gelaterias in the city use powdered mixes made with artificial flavors instead of fresh, natural, ingredients. Seek out gelato that lies flat in its container (industrially made gelato will be piled high in its display case) and look for flavor colors found in nature (pistachio should be earthy, not neon, green). Fatamorgana, Gelateria dei Gracchi, Giolitti, and Gelateria del Teatro are true, artisanal gelaterias with various branches scattered throughout the historic center. See our guide to the best gelato in Rome to find the closest gelateria to you. 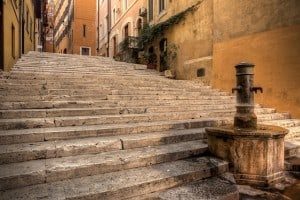 Nasoni (literally, “big noses”) are Rome’s public outdoor fountains that siphon clean, cold water directly from mountain springs and deliver it into the city via the repaired aqueducts. Hold on to your water bottle even after you’ve emptied it – stop for a free refill at one of the capital’s 2,500 nasoni, or block the end of the spigot with your thumb to let water out out of a hole on the top, a quick and easy DIY water fountain. A handy app, I Nasoni di Roma, will direct you towards the nearest nasone if you find yourself in the throes of heatstroke. 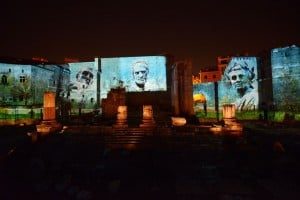 DO IT AT NIGHT

Wait until sunset to accomplish your sightseeing. Not only is Rome far cooler in the evening, but it’s also at its dreamiest. Take a moonlit stroll past the city’s most iconic attractions, or sign up for a guided tour of the Colosseum – groups are even led to the arena floor and down to the underground hypogeum, where the gladiators once paced before combat. Book at coopculture.it. And for the third year in a row, digital multimedia journey Viaggi nei Fori unfolds every evening throughout the month. The brainchild of journalist Piero Angela and physicist Paco Lanciano, this innovative project allows spectators to virtually experience the ImperialFora, using cutting-edge technology to transport them back to the Rome of the Caesars. Visitors begin with a night time stroll through an ancient, underground tunnel (open publically for the first time since its excavation) which leads to the Fora. Once inside, viewers are treated to a show which recreates the original appearance of the forum through a blend of video, lights, and special effects, gifting viewers with a visual and conceptual understanding of what the sites looked like at their peak. A running narrative available in 8 languages guides the audience. See www.viaggineifori.it/en for details. 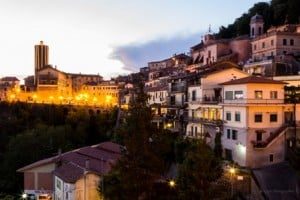 HEAD FOR THE HILLS

Long before the advent of airconditioning, wealthy Romans in ancient times wouldflee the summer heat with a restorative trip to the countryside. Today, locals still follow in their footsteps, swapping the city for a day in the Castelli Romani, thirteen townships tucked away in the Alban Hills. Frascati is known for its wine; Nemi for its lakeside views; and Ariccia is home to some of the best porchetta (slow-roasted pork) in the region. 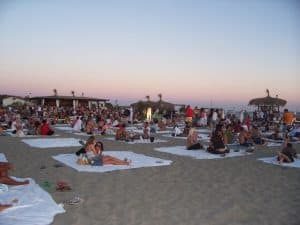 When all else fails, suit up and cool off the old-fashioned way. Rome boasts plenty of swimming pools (check out our favorites) and even has a smattering of water parks like Hydromania (Vicolo del Casale Lumbroso, 200) and Aquafelix (Via Terme di Traiano) in nearby Civitavecchia. The beaches off coastal towns like Santa Marinella, Fregene, and Santa Severa are all within an hour away from the city by train, and promise a refreshing dip in the Mediterranean. Lake Bracciano is another alternative – formed by a volcanic eruption an estimated 40,000 years ago, Bracciano is considered one of the cleanest lakes in the country thanks to its strict regulations against motorboats. Tourists and locals are drawn to the lake not just to swim, but also to canoe and scuba-dive.