Check out the popular quarter of Testaccio, a perfect balance of neighbourhood ambience, industrial art, exquisite food and rowdy nightlife all in handy reach.

Testaccio quarter is a gentrified hip district south of the Aventine Hill in Rome where locals still sit with a gelato after market hopping. Once a working class zone for trade and industry steeped in ancient history, the area has reinvented itself with progressive party organisers and contemporary chic restaurants staking their claim, followed hot on their heels by the city’s best street artists and music lovers of all tastes.

The area’s history is rich and varied. Testaccio hill or monte is entirely made of ancient broken earthenware pots or cocci, used for transporting goods such as large quantities of olive oil to the bustling river harbour. The hill was used for many celebrations in the Middle Ages and later as a place of papal ceremonies and its porous structure provided the perfect spot for wine cellars. Now new venues occupy these cellars and many ex-trade buildings and warehouses meld with the quarter’s abundant history. At the beginning of the 20th century Testaccio was a busy industrial hub and this fingerprint is still very palpable, such as at the Ponte dell’Industria (Bridge of Industry), an alarmingly narrow bridge of imposing raw iron overlooking the old overgrown warehouses and workshops lining the river.

Many miss the chance to become steeped in the melancholy beauty of the park-like Non-Catholic cemetery on Via Caio Cestio, 6. In the shade of the colossal ancient pyramid tomb, visitors amble peacefully along the gravel strewn pathways with dozing cats and subtropical plants, eyeing the assorted stepped tombstones and statues. English Romantic Poets and one-time friends Keats and Shelley are both buried here along with countless other noted figures. The free entrance makes it all too tempting, a welcome contemplative oasis amid the rumble of Rome’s traffic-clogged streets. (Open Mon-Sat 9am-5pm, Sun 9am-1pm). 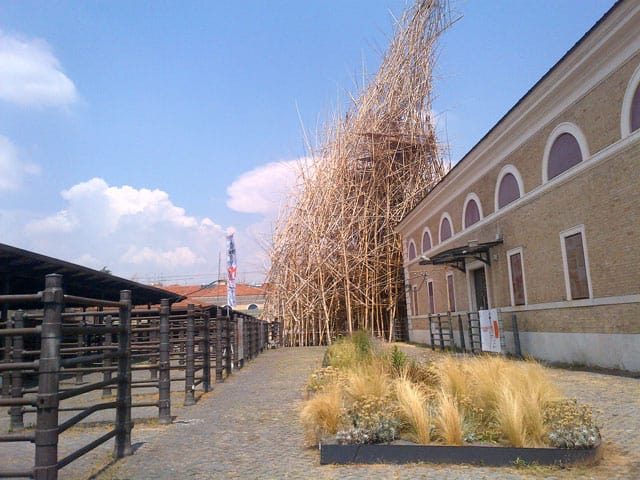 Nearby is the ex-stockyard turned massive contemporary exhibition and multi-use complex on Piazza Orazio Giustiniani, 4. The grounds were a working slaughterhouse from 1890-1975, designed by architect Gioacchino Ersoch. The sprawling 5,000 square meter premises encompassed stables and factories to handle the inflow of stock as well as accommodation for the manager with health and safety offices onsite. Three imposing arches once allowed the entry and exit of large numbers of livestock. Today the ex-abattoir is a place of great cultural interest, a unique and flexible platform for innovative events, exhibitions, educational activities, workshops, bio-business and cultural centres. La Pelanda is a centre of cultural production managed by Macro Testaccio, sister to the acclaimed Macro gallery on Via Nizza, with all the high calibre international art minus the steep entrance price. La Pelanda had the previous rather macabre function as a place for peeling slaughtered pig stock. Five buildings are arranged around a large gallery each measuring 1,400 square metres. The barn-like halls of pitched ceilings, whitewashed brick walls, iron frameworks and suspended meats hooks emphasise its grand space and volume. (Open Tue-Sun 4pm-10pm).

Also found onsite is Villaggio Globale, an occupied social centre and venue with an underground vibe and a calendar of progressive events and DJ sets and La Città dell’Altra Economia is 3,500 square meters of exhibition space, events centre and meeting place to promote organic farming, fair trade and low environmental impact including a library, game room, bio-café and bio-restaurant.

Testaccio is also a food lover’s paradise with both traditional and modern choices. It’s enough for me to just wander through the sprawling white gazebo marketplace that is Testaccio food market between Via Galvani and Via Alessandro Volta. It is bursting with sights and smells for the diehard foodies, with fresh and local Italian fare from cured meats, pickles and pesto, to handmade products, veggies, and everything in between. I picked up some adagio cheese and salami here as a yummy treat that didn’t break the bank either. It’s got a very authentic, anti-tourist vibe with locals getting their fresh weekly shopping in from their 70 plus stalls (Open Mon-Sat 7.30am-2pm).

Testaccio is famed for its crowded restaurants and traditional Roman food which you can enjoy in local hot spots like Felice a Testaccio, Pizzeria da Remo, Flavio al velavevodetto along with La Fraschetta di Mastro Giorgio, Volpetti, Pecorino, and Angelina among many others. And for your after dinner gelato craving, there’s the popular Giolitti.

At night you really are spoiled for choice in Testaccio, with myriad venues offering all sorts of after hours fun. Keep your eye out for the behemoth party arena that is Gasometro soon to open again from June to September on Via del Commercio, 36 in Testaccio. A string of open-air bars, venues and clubs are flanked on one side by the dramatically lit-up disused industrial structure of the gasometro or ‘gas holder’ established in the early 20th century, and the River Tiber on the other. Definitely a hot new night spot in Rome.